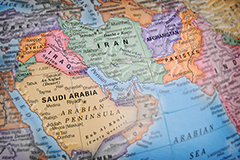 We have so far covered Russia, Greece, France, Eastern Europe, the Cayman Islands, Spain and Australia. If you would like to know more about working in these regions, please see the appropriate articles.

The Middle East continues to capture the imagination of many UK accountants. Most people reading this will know at least someone who has made the move and with the feedback from those migrants being so positive, it’s not surprising that many continue to explore this move alongside opportunities in the UK.

Whilst most job searches in the region are prompted by the lure of a tax-free salary, there are also sound career reasons for moving there. The vast majority of UK expats report that their career progression is quicker than it would be in a more mature market and are pleasantly pleased by the level of responsibility that they are given. Also, as the recruitment market is more fluid and places a greater emphasis on the overall skill set, accountants find it easier to move between sectors than it would be in the UK.

Those interested in working in the region are most likely to be drawn towards positions in Bahrain, Kuwait, Qatar and Saudi Arabia, but it is Abu Dhabi and Dubai, the twin jewels in the UAE’s crown, which attract the most attention.

Abu Dhabi and Dubai have always been important trading posts but have now firmly established themselves as the locations of choice for multinationals when choosing a base for their regional HQ or shared service centre. As a result, there is a good demand for auditors, not only from within public practice (with Ernst & Young generally regarded as the strongest of the ‘Big 4’ in the Middle East region) but also from numerous industry sectors for positions in financial control, reporting and analysis.

Although the state’s citizens are devout Muslims, the UAE is remarkably liberal and there’s enough going on in the evening to keep even the headiest of expats well entertained. Living accommodation tends to be of a better quality and finish than the UK and the infrastructure is strong enough to support a large expat community. Generally speaking the UAE offers a safe environment and many female expats feel that they were genuinely welcomed.

However, as with everything, there are a number of points you need to consider alongside the many positive reasons for making the move. For example, it’s important to consider that house prices are rising and as salaries are tied to the US Dollar, you need to think hard about whether that tax free salary is going to deliver as much of a punch as you hope it will. Furthermore, you do need to ensure that the company and the job you choose really is the right one for you. The visa you receive binds you to that employer. This was a measure introduced to prevent job hopping and you will have to enter a cooling off period before another is made available. For those with families, you need to bear in mind that whilst there are numerous international schools offering a very high standard of education, they do fill up quickly and entry takes planning and preparation.

You also need to bear in mind the wider dynamics of the market and understand that jobs are not as likely to go to candidates from the UK as they once were. There is plenty of competition from candidates from cheaper labour markets such as India, Pakistan or the Philippines. For those and many others coming from the East a move to Dubai is also extremely attractive and the experience in the Middle East has in many ways become a platform from which they can target roles in Europe. Accountants in India for example can find it difficult to secure a job in the UK from their native country, but have found that employers in Europe are more likely to take their applications seriously once they have gained some experience in a transitional market like the UAE. These candidates are also well trained and provide a substantial saving on the salary of a UK national.

Finding a job in either Abu Dhabi or Dubai does take time and some level of investment. Most expats suggest that you come on a tourist visa and use that as a means of finding a role, as being available for interview will make you far more attractive than a candidate who is trying to orchestrate the search remotely. Of course, it will also provide you with some time to decide whether this is really the right move.

There are plenty of recruitment companies who could help with the search and agencies such as Barclay Simpson and Marks Sattin regularly have positions available in Dubai. Somewhat surprisingly, the press remains a popular means of finding a new role, with Gulf News and the Kaleej Times being the most popular.

Generally speaking, a move to the region may be a sensible way of ensuring your career continues to develop in the face of the UK’s slowing economy. And whilst working in the Middle East does require a level of sensitivity to cultural and religious issues, the region can be an extremely effective way for British accountants to secure leading finance positions.

Written by Max Williamson for CareersinAudit.com,  the leading job site for auditing vacancies.

Keep up-to-date with all the current audit vacancies in the Middle East by registering for email alerts.