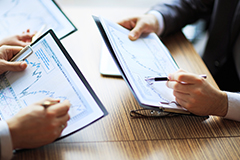 There is a bit of an assumption that the same term means the same thing right around the accounting globe. But the more you look the more you discover that there are huge cultural differences. And these differences are not just stumbling blocks to any efforts at global harmonisation. They are also obstacles to the auditor making assumptions about the integrity of financial reporting across a multi-national, for example: If the rules and the figures mean one thing in America and another thing in Europe then what on earth do you think they might mean elsewhere?

This is obviously important. Increasingly the great global cross-border marketplace which the auditing world celebrates depends on an assumption that not only, as Gertrude Stein might have said, 'an audit is an audit is an audit', but that people have the same objectives around the world.

But this is not so on the most basic of premises. Lynn Turner was a onetime chief accountant at America’s main regulator, the Securities and Exchange Commission. This is what he said about Enron’s behaviour when he testified before the US Senate Committee on Banking, Housing and Urban Affairs in 2002 :  “Standards that permit hundreds of billions of dollars in synthetic lease financing off balance sheet liabilities to be hid from the eyes of investors; that permit companies to avoid consolidation of special purpose entities for which the company itself has the majority, if not practically all of the risks and rewards of its operations; and that result in the value of compensation in the form of stock options to be excluded from the income statement are not transparent standards. They are better described as a chapter from Grimm’s Fairy Tales.”

The point he was making was emphasized by Tim Bush, director at Hermes UK Focus Fund, at a roundtable event in London to discuss emerging issues in Anglo-American corporate governance. This is what he had to say about how Enron broke none of the American rules: “It used ‘mark-to-market accounting’”, he said, “which in plain English is counting chickens before they are hatched. Second it used ‘off-balance sheet’ financing, which in plain English is not showing your shareholders how much debt you’ve got behind your income, and third, it privately pledged unissued Enron stock as collateral for these hidden loans, instead of taking a visible charge on Enron’s assets”. And as he went on to point out: “None of these things, separately or together, were permissible under UK company law. Yet Enron’s accounting had passed the tests of US Generally Accepted Accounting Principles, (US GAAP), on these things.”

This sort of thing is deeply embarrassing to the American regulators and standard-setters. And it is a huge dilemma for auditors trying to deal with, for example, a company which straddles the American and European regulatory regimes. The arguments developed over the day and a half of the round table event organised by the Institute of Chartered Accountant in England & Wales. And it became apparent that one of the fundamental problems was a sharply different view of the corporate governance principles which govern such things.

One of the most interesting and illuminating contributions came from Mark Anson. He has straddled both cultures. He was chief investment officer for Calpers, California’s state retirement system, and as such one of the most powerful investment organisations in America, and is now chief executive of Hermes Pension Management in London, which performs a similar role in the UK. Throughout the discussions he kept firing out examples which thought seemed extraordinary from his American experience. But his essential point was that “somewhere along the line America forgot to extend its democratic principles to the capital markets”. For example, in America investors cannot vote a director off the board. He talked of a time when he was describing the UK system to an American corporate Chief Executive Officer. The CEO had reacted with amazement. The idea had never entered his head. “What a concept!”, his reaction to Anson’s observation began, “shareholders could elect their own directors!”.

He also talked of the contrast between the UK concept that the chairman and the CEO should not be the one person, and the American tradition that the roles should be combined. It is now generally accepted that the UK practice provides useful checks and balances and is the cornerstone of contemporary best practice in corporate governance. The American tradition of combining all the power in one person, by contrast, has been seen to be disastrous as imperially-minded CEOs brought corporate ventures to their knees in orgies of rule-breaking, unstoppable and ruinous strategies, and appalling personal behaviour. Anson talked about how he had talked about the helpful idea of separating the roles of chairman and CEO to an American director. The response had been: “When they are combined the chairman and the CEO can work closely together”. Anson gave a wry smile to the audience and said: “That gives you an idea of the naivety prevalent in corporate America”.

It is easy to knock holes in American ideas of corporate governance. You have to remember that for the majority of American companies the vast internal market is enough for them to grow very large and successful indeed. If good growth means expanding in Minnesota then they do not need a perspective on how companies are governed in Europe, Hong Kong or Australia. By contrast European and UK companies, in particular, have traditionally looked outwards, beyond their borders, for expansion. So the corporate cultures are very different.

That is fine. But where the sensitivities need to be understood very well indeed is in the professions, like audit, where cross-border work has become a commonplace.

Written by Robert Bruce for CareersinAudit.com, the leading job site for auditing vacancies.