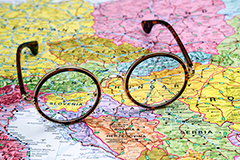 We have so far covered Russia, Greece, France, the Middle East, the Cayman Islands, Spain and Australia. If you would like to know more about working in these regions, please see the appropriate articles

The last five years have seen significant numbers of Eastern European auditors moving to Western Europe, but it seems that many are taking the decision to return. This is due partly to the slowdown in the west, but also to improved salaries and better opportunities for career development in their home markets. Salary levels for Polish auditors are now greater than those of their counterparts in Spain, Portugal, Italy or Greece. Other markets such as Bulgaria and Romania are working hard to repatriate native auditors to lead the finances of businesses that are growing beyond the abilities of those currently in charge.

Many corporations have already established shared service centres in the area, including General Electric and Diageo. Additionally, the region has become a hotspot for industries such as automotive, where reducing labour and material costs is key.

Those returning to their home market are taking with them experience of international working environments. Those standards will now be applied to their new workplaces, which will hopefully benefit from less discrimination, greater transparency and generally become more attractive for those seeking international experience.

Written by CareersinAudit.com, the leading job site for auditing vacancies.

Keep up-to-date with all the audit vacancies in Eastern Europe by registering for email alerts. For more information, click here.