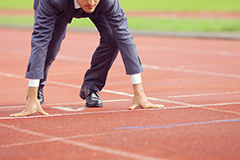 Heard the one about the frog? The frog which, when dropped into boiling water, will leap to safety, but boiled up from ambient, will simply cook.  A metaphor I’ve rolled out many a-time to warn accountants and auditors of the perils of insidious pressure.

But taking the metaphor one step further, let’s have a look at what happens when the water in that proverbial pan cools down.  Its one thing to be driven by external deadlines, and ‘stressure’ (sic – think about it!), but how do we maintain momentum when there is no immediate outside force driving us onwards and upwards?

First, let me take you back to January earlier this year.  Avid CareersinAudit.com readers may remember my article ‘Surviving Pressure’  where I shared with you this oh so familiar scenario:

Back in the 1990s as a Big 4 audit manager, my portfolio included no less than 6 audits all with reporting deadlines in the same week of January.  Only to be followed 3 months later by a remarkably similar pattern in April.  Getting through those deadlines was tough but attainable; year on year so called January ‘madness’ became the norm.  But it was the months immediately afterwards and beyond, that presented the biggest challenge.  That is, the ‘mopping up’ period: deadlines met, hours back to some sort of normality but ever ahead, that ‘long and winding road’.  Enter a big dose of Anti-Climax.

‘Arriving at one point is the starting point to another’, John Dewey

So pressure off, we can sit back and......... what?  Well, go on working like crazy, of course.  Because, let’s face it, the long and winding road is just January without the deadlines.

Of course, once you’ve passed a challenging winning post, first up, do acknowledge your success.  Celebrate.  Have a weekend off! But then get right back in the saddle!  And guess what?  Create some more pressure.  Set start and finish deadlines – and work to budget.  Yes, that’s right, self-impose deadlines and budgets in the absence of the external variety.

That’s what I prescribed in January.  But to keep on going, create momentum and sustain motivation, there’s much, much more you can do.  So here’s the rest of the story.

Now, bear in mind that I didn't just tell you to go create some stress.  I said create some pressure. You need to set yourself tight schedules to work to, because if you don't Parkinson’s Law will kick in and your tasks will ‘expand to fill the time available’.  So set yourself some targets and beat that clock.

Speaking of which, remember to keep on a tight leash, those wily brothers, brilliance and perfectionism. These guys have their place but keep them in perspective. Performers will spend hours practising a single bar of music but, hey, making the coffee’s just making the coffee!

And remember nothing succeeds like success: if you feel you’re on top of things, you will be. So ensure you have specific goals and targets. Keep in mind Pareto’s Principle; know which 80% of your goals are best served by that crucial 20% of your activities. De-chunk your tasks: break them down into smaller steps which you can see disappear as you complete them. And anything you do, learn to love it: find the fun! Don’t forget Nietzsche’s maxim ‘What doesn’t kill me makes me stronger’.

Here’s a list of extra tips to further boost self-motivation.

‘Begin with the end in mind’, S Covey

‘Motivation is what gets you started. Habit is what keeps you going’,  Jim Rohn

Remember those brothers, brilliance and perfectionism?  They have an ugly sister, commonly known as procrastination. Don't think: do! If you're stuck, do something else! To beat writer’s block writers simply write. Rather than nothing, do something!

D’accord, c’est la vie:  the long and winding road really is just January without the deadlines.  Do everything you can to ensure you’re up to the journey.  Don’t underestimate the role of physical well-being on the trek.  You know what they say about all work and no play?  Find time for nourishment, exercise, relaxation, sleep..... and a good dose of fun.

And the last word goes to Zig Ziglar: ‘people often tell me that motivation doesn’t last and I tell them that bathing doesn’t either. That’s why I recommend it daily’.

Now go forth and enjoy your long and winding road!