Your Case for Promotion 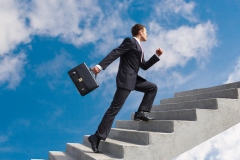 Jon couldn’t believe his luck.  At the tender age of 25, one year post qualification, he’d been awarded his first managerial promotion.

From newly qualified senior to manager, it was just short of twelve months since that precious piece of paper had burst through the letter box – his ticket to ride – up, up and away.

Jon’s Principal was re-assuring but realistic: ‘Your technical skills are first rate Jon, but you’re going to have to learn a lot more, at a fairly brisk pace.  As team leader, you’ll need to get the best out of your people, as well as project management and handling the work flow to meet some pretty challenging deadlines’.

But young, free and single, Jon had the time, the commitment and the hunger; he was going to give it his all. He wanted to prove rapidly that the confidence of his superiors was well placed.  And, over the next 3 years, that’s exactly what he did.

Making your own luck

Of course it wasn’t luck that got Jon this first promotion.  From Day One as a trainee auditor he’d been forward-looking and focused.  He’d shared his ambitions with me as his mentor and we’d both agreed that, once clear on where he wanted to get to, it would never be too early to prepare for promotion.  And so he did.

He further developed his innate self-awareness.  While he competently delivered what was expected during his training period, he always had his sights set on what would be required at the next level up.  In other words, he set about stretching himself that little bit more.  For example, once he mastered the audit of a particular area, he’d offer to do an initial review of the audit junior’s work.  Not only was he stretching himself, but he was getting himself noticed for all the right reasons: initiative, enthusiasm, team work. These qualities would really count at manager level.

But above all, Jon was driven by self-belief.  He knew exactly what he wanted and why he wanted it.  And he knew he was capable of getting to the next level.  Of course he was aware of his skills gaps and even his inherent weaknesses but he didn’t ignore them. Instead he invested in filling these gaps.

He used a personal SWOT² and skills gap analysis to address his short-comings.  He invested his personal and professional development in the areas that really mattered both in his current role and the next rung on the ladder. He believed in himself. This showed in his performance and ultimately gave his superiors the confidence to promote him early.

A rather different Jon came to see me as an external client. He’d fulfilled his early promise as a first- rate manager.  With consistently good feedback, he was widely considered an indispensible member of the team, who worked extremely hard, doing more than his fair share of the overtime.

But subsequent promotion to senior manager continued to elude him.

Dejected, demoralised and seriously considering a career change, he wanted to figure out ‘where had it all gone wrong?’

Beware of ‘all or nothing’ thinking

Well first up, it hadn’t all gone wrong.  Jon was indeed a valued member of the team.   I quickly ascertained that the organisation would be devastated if he left.  And leaving clearly wasn’t what he wanted either.  What had happened was that he’d become extremely good in his current role but had failed to keep his sights on the next rung up.  All that good stuff that had won him his early promotion was equally relevant to subsequent promotions.

But that’s not all

What Jon hadn’t grasped was that the promotional ladder isn’t linear.  There were further dimensions to promotion at the higher levels.  It wasn’t simply a question of building on his manager skill set, doing more of what he had been doing, and doing it better.  To get to senior manager, he’d require more competencies, incorporating new ways of thinking and behaving.

And so commenced a new era for Jon when he set about discovering what really did count in the role of senior manager.

Jon began by  researching how the senior manager team operated.  What were their attitudes, mindsets, behaviours? What got them noticed and what counted with their superiors?  He realised that there was a strong expectation for lateral thinking and creative problem-solving.  Relationships, networking and political-awareness were crucial.  And there was something else that he noticed about this level – they were all different.  They each had their own distinct USP³.  Each of the senior managers could demonstrate - and communicate - their individual worth to the organisation.

For example, one manager was a charismatic public speaker, a marketable skill which the organisation capitalised on by using her as a key spokesperson.  Yet another manager was a skilled networker and well-connected. The business valued him highly as the front person at building new relationships.

It was clear that as well as being responsible for their own team, in their own environment, the remit of the senior manager was organisation-wide.

Where did this leave Jon?

After much soul searching, Jon came to the conclusion that promotion to senior manager wasn’t what he wanted.  Jon loved what he was doing already – a hands-on role, coaching individuals, dealing with technical issues at the sharp end.  He was good at it and he wanted to do more of this, not less.

He is now exploring options.  He’s having conversations with his existing employer about the viability of remaining long-term within his existing role, as a ‘career manager’.  Plus he’s discussing alternative pathways within the organisation.  He’ll also research roles beyond his current organisation, where he can do what he does - and likes - best – and where he can build on his existing skill set.

Jon realised that upwards promotion is not the answer for everyone. Despite his early meteoric rise, he thought laterally about his wants and needs and started to broaden out his career research.

What about you? Is it a case of ‘the only way is up’ or is it something rather different?

This article was written by Carol McLachlan for CareersinAudit.com.

Notes
¹ Automotive and assembly line industrialist Henry Ford (1863 – 1947) was the American founder of the Ford Motor Company and father of modern assembly lines used in mass production.
² Analysis of Strengths, Weaknesses, Opportunities and Threats
³ Unique Selling Point. What differentiates you?