Working in a Foreign Country 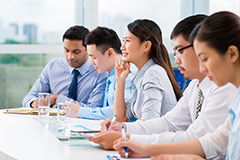 In today’s business world, few multinational companies would appoint a financial head who didn’t already have experience in an international environment. Undertaking work abroad demonstrates flexibility, mobility and cultural acumen, which are all qualities which recruiters and headhunters will look for when looking to fill senior roles.

Working outside your home country can be daunting and risky, and this is something to consider carefully. There can be a variety of reasons why working abroad isn’t a good idea, from professional to personal, and it can be surprising how much an uncomfortable personal life can impact on working within a company.

Auditors, accountants and other finance professionals make international moves all the time, and while many gain more advantageous career opportunities, some find the professional or cultural environment in a foreign country unsuitable for them. Based on the feedback we have received from finance professionals working abroad in an audit job, this article details some of the ways in which different countries compare as a place to work.

America is always an attractive location to live and work, but it can be difficult to obtain a work visa. The exchange rate often makes American salaries look quite weak compared to what is on offer in the rest of the world, particularly for audit jobs but the cost of living is relatively low. Most people who have worked in the US feedback positively on the experience, particularly those who worked on the east or west coast.

One thing which those who have experienced working in the USA have warned of, is that responsibility tends to gravitate upwards rather than downwards. This means that low level auditors could find that they actually have far fewer responsibilities at a professional services firm in the US than their European equivalents.

Germany is less centralised than many other European countries, with big business spread across many of its key cities, rather than all concentrated around the capital. In this way it’s more important whereabouts in Germany you can work. Frankfurt is popular with financial services, with Berlin, Hamburg and Cologne all being home to financial companies who recruit internationally. Many British workers have enjoyed spells in southern Germany, generally around Munich.

Brits working in Germany have found that working in the country tends to be less open than what can be found in the UK or Germany. Decision making is more carefully deliberated, which some workers have found frustrating in the past.

By way of an example, this may take the form of working in a European or EMEA HQ of a US multinational, which will have a collection of nationalities within it and is performing assignments on a regional rather than domestic basis. In spite of this pitfall, the rewards of working in France are substantial and I feel that most people have respect for a foreigner who manages to settle successfully in France.

Switzerland is a popular location for many finance professionals, who are attracted to it because of the high number of multinational companies which have established HQs in the country, along with competitive salaries and low taxes. It isn’t necessary to speak French or German to work in Switzerland, as it is a truly international business environment.

When working in Switzerland, care should be taken over the specific location. While they speak French in Geneva it’s more likely to be German in Zurich, so choose carefully based on the languages you feel comfortable with. While it does offer a good work/life balance for people with families, the nightlife is very limited in Zurich in particular, so it’s a choice which should be carefully considered before entering into.

It is obvious why working in some of these locations is so appealing; improving your knowledge in a thriving fund and wealth management industry in some of the most beautiful locations in the world. You could also enjoy a tax-free salary.

It has been suggested that spending too much time in these types of locations could lead to individuals being marginalised into narrow career paths, with recruiters possibly being inquisitive about how much time was spent sailing and enjoying the wonderful climate instead of getting stuck into work.