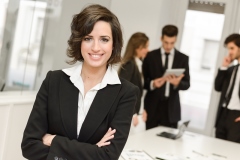 Is the man/woman ratio level in the audit industry?

8th March marked international women’s day, an annual anniversary first observed in the USA on February 23rd 1909 labelled ‘National Women’s day’. The day was quickly succeeded by an annual international recognition which is now widely celebrated as a mark of women's economic, political and social achievements in the modern world.

With over 100 years passing since the first observation of International Women’s day, you could be forgiven for thinking that Men and Women are given equal opportunities and responsibilities in the workplace. But is this really the case for those who pursue and follow a career in Audit, Compliance or Risk?

With the audit industry being hundreds of years old and a profession historically widely practiced by men you could argue that the culture of a male dominated business still exists today. However evidence proves otherwise, times have changed and so too with it has the culture resulting in a more open and diverse workplace, things are getting better!

In just a few decades we have seen changes in our wider society that have altered our culture dramatically. We now commonly see women gaining the recognition and praise for their commercial and political achievements they deserve, marks to be proud of. It’s a trend that is too continuing for women taking up Jobs within Audit, Advisory, Assurance and Risk. Take Internal Audit roles for example, many women (and indeed men) are attracted by the more favourable work-life balance offered by working for a firm in-house over the sometimes endless deadlines and stresses from clients common in the larger Audit and Accounting firms.

In very wide general terms women can often seem to be more deliberate, collected and calculated than men, traits that are perfect for a career in the audit industry and commonly being noticed and acted upon by our largest global companies. For example the big four auditing firms all individually encourage and support diversity within the workplace and have seen women taking more Senior Management Posts within their respective executive boards - just a few decades ago this would not have been the case.

The benefits to corporations and governments being more open to people from diverse backgrounds are extensive. In a world where we are increasingly connected via the internet and physical locations are no longer a barrier to building business relationships, it’s vital that companies employ people irrespective of age, disability, gender, race or religion and instead understand the immense opportunities presented to them when people of different cultural and religious backgrounds come together to build a deeper understanding of a company’s stakeholders.

Aside from diversity it’s important for employers in audit to recognise the need of a sustainable work-life balance and the positive effects it has on many different industries outside the audit and finance sectors, giving consideration to adopting methods for their own companies. Going forwards bosses should ask themselves ‘If we offer a flexible working programme for our staff where we are less concerned about where and when they work, will our staff be more content and produce better work as a result?’