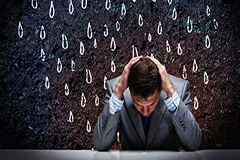 Is it just an impression, or do most blues numbers really begin ‘Woke up this morning’?

For many in the world of work, waking up is already a bad start to a demoralising day spent in modern-age dark satanic mills. In the world of audit, on the other hand, we auditors are typically, a purposeful, up-tempo breed, and our working conditions generally mean we have every reason to be so: we certainly don’t much get sympathy when we moan! But that doesn’t mean we should pooh-pooh the notion of workplace depression.

Sooner or later, everyone experiences office blues: from junior trainee right through the ranks to the lofty echelons of director and partnership. Typically, the blues kicks in at the end of the busiest periods when the pressure drops. Everything’s still important, even hectic, but suddenly there are no deadlines. Nothing has changed, except for the exciting bits; you’re running on empty.

For external auditors with an over-abundance of December year ends, a major blues time is February. Or if your particular glut is March year ends, read May. We are talking about the numbing emptiness that follows hard on the heels of January and April’s high-octane year-end deadlines. I’ve told my own story many times before but as Big 4 audit manager, my portfolio included, no less than six audits with reporting deadlines in the same week – the third week of January, as a matter of fact. January madness became the norm. It was February that caused the problems. The ‘mopping up’ period. Deadlines had been met, hours back to some sort of normality but still tonnes to do. Anti-climax kicks in. How do you maintain momentum when the pressure starts to evaporate?

However, there’s no real difficulty dealing with passing phases like February. Firstly, take a breather and just chill; next, get back in the saddle. Set your own tight deadlines to keep Parkinson’s (‘work expands to fit the time available’) Law at bay. Invest time in planning what you do not just how you do it to ward off excessive ‘busy work’ at the expense of effectiveness. This also helps with two nasty conditions, chronic Procrastination and vanity-project Perfectionism. And finally, keep Pareto in mind, and consider which 20% of your activities promote 80% of your valued goals. In short, create some pressure but, whatever you do, don’t confuse pressure with stress.

So some simple time management techniques that you’ve heard from me before. Valuable to treat the post busy period blues generated from the dip created by reporting relief felt in both the external and internal audit landscapes alike.

But please don’t either confuse ‘I got that everybody’s short-term blues’ with ‘I got that real mean it won’t go away blues’. Constant workplace blues is not one we’re all in together, and it’s not restricted to specific circumstances. Running deeper than short-term blues, it’s potentially altogether more serious.

Constant blues locks people into a grim here and now: sufferers see nothing to look forward to, and no good times to look back on. Getting up in the morning is a real hurdle (not just something to jokingly grumble about) and travelling to work is a nagging torment. Clock-watching blights every stage in the day, as breaks, lunch, home times, the weekend, never want to arrive. Worst of all perhaps, the social side of work, which for so many colleagues makes the office immeasurably preferable to home, loses all appeal.

What’s to be done?

Constant blues is not tackled in the same way as temporary blues. If you feel gravely unhappy at work, you should seriously consider the possibility of medical depression and consult your GP without delay. You should in any case perform some straightforward self-help actions. Regular exercise might make a difference, as might taking up a new leisure activity – or simply taking up any leisure activity! You could review your diet and your sleeping patterns: being tired and out-of-sorts at the start of the day doesn’t help!

Consider too blaming the job itself. Review your career strategy to see whether you’re stuck, over-stretched or under-stretched or even in a dead end.

But don’t just sit there humming ‘I got that nothing-to-be-done-about-it blues’.

This article was written by Carol McLachlan exclusively for CareersinAudit.com