Before Accepting Your New Job 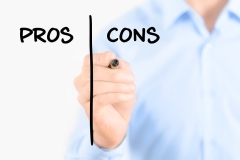 The interview process for audit jobs can be very competitive, and it’s often tempting to accept the first job you are offered. However, sometimes it’s worth taking the time to step back and have a good think about the decision.

If you were unhappy in your last job you might have found yourself applying for any job going or maybe you waited for the perfect job opening. Either way its worth re-reading the job advert and any form of job description you might have as there might be something you missed or an aspect that wasn’t really covered in the interview. Every audit job is different, just because you know the title, don’t assume you know the job.

Think about the Commute

Almost inevitably the business will be located somewhere new, which will likely require a different commute. Try and find out how much the cost will be and how long it will take at peak times. It might only be one change and two extra stops on the tube, but it can easily add a lot more time to your working week.

Work out a Budget

The chances are the salary you’ll be on will be different in the new job. Whether that movement is up or down it’s worth sitting down in front of a computer to do some sums. Once you’ve factored in your new salary plus any other costs that might change with the new job, you’ll have a much better idea of how well the new job pays.

Ask a friend or family

A second opinion always comes in handy. They will probably be able to be a bit more pragmatic and realistic about your options. Though the decision ultimately has to be your own, discussing it with a friendly face often cements the decision in your mind.

Think about yourself in three years

Though the time anyone spends in a job will vary, three years is a good benchmark. Are there promotion opportunities within the company? Where does the business look like its going? This kind of forward thinking might seem a little clichéd but the objective distance you can achieve is usually worth the effort.

Could you be offered other jobs

The chances are the job you were offered wasn’t the only vacancy you applied for. Be realistic about the other jobs you applied for, are they more the kind of job you are looking for? The difference between two audit jobs can be huge so be sure to think about your other options. You’d be surprised the number of people who are offered jobs shortly after accepting another.

At the end of the day you will probably have a gut feeling whether the new audit job is the one for you. You can do all the practical thinking in the world but often it’ll be down to your heart not your head.