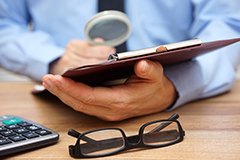 Internal auditing used to have a rather dreary reputation. It was a career cul-de-sac to be avoided at all costs, staffed by clipboard-wielding pedants, blessed with 20-20 hindsight, obsessed with telling people what they had done wrong. Thankfully, this is no longer the case.

The internal auditors you meet nowadays are a more cheery bunch. Their pay and status are increasing in line with a growing awareness that their work is actually rather important. They are highly valued, in demand and in short supply.

A new employment market survey published by the Institute of Internal Auditors (IIA) confirms as much. Now is a good time to be a qualified internal auditor, it would seem.

But the news from the survey is not all good. It suggests that employers are going to have to start paying more in future, if they are to attract the kind of internal auditors they need, but finds little evidence that they are planning to do so.

Salary and benefit levels still vary widely across sectors, but are on the increase, according to the IIA survey. The top 20% of heads of internal audit earn over £120,000 a year, with those in financial services making much more. The average senior auditor earns around £40,000 a year.

But nearly three quarters of the employers in the survey said they were finding it hard to recruit internal audit staff. The problem, they said, was finding the right kind of people.

What are they looking for? Sector-specific experience isn’t always necessary, but it clearly can help. Over two thirds of survey respondents valued sector experience when recruiting internal auditors; it was seen as particularly useful in financial services and the public sector.

But above all, employers said they looked for personality and soft skills, rather than technical ability. The heads of internal audit who responded to the survey said they wanted people who can build relationships within their organisations.

The good news for internal auditors who have the right mix of skills, qualifications and experience is clear. Nearly every employer in the survey felt they didn’t have enough internal audit staff and couldn’t keep pace with their board’s growing expectations of what internal audit should be doing.

Changes to corporate governance best practice and a growing awareness of the need for good risk management have boosted the profile of internal audit. Worries about poor internal control, weak project management, or reputational damage are on the board agenda at organisations across the private and public sector. These are all issues where internal auditors have something to contribute.

And it’s not just the board. The survey confirmed that internal audit input is valued by management across organisations. The finance director, the company secretary, the chief risk officer… people are queuing up to pass challenging projects on to internal audit.

This demand for internal audit expertise from boards and management is not likely to diminish any time soon. In fact, all the auditors in the IIA survey expected it to intensify.

Not surprisingly, most of the employers in the survey said recruitment and retention of audit staff was a top priority, with the majority saying that the internal audit department did not have the manpower it needed to meet the organisation’s expectations.

And here we find the cloud that accompanies every silver lining. Huge demand for internal audit expertise is great for those looking to move jobs, but less so for those who would rather stay put.

How much fun is it if everyone in your department has left, enticed away by one of those employers desperate for staff? How much harder do people have to work? And who is going to explain to the audit committee that the internal audit team can’t quite provide the assurance they want, because there aren’t enough staff?

Maybe that’s why the survey also shows that a third of the people working in internal audit want to get a new job in the next six months. Most of them want to stay in the profession, but they want to be working for someone else. Look around your office – one in three people don’t want to be there. Is it you?

Averages, of course, can be misleading, and a desire to move on need not imply a sense of unhappiness with one’s current position. Indeed, the most popular reason people gave in the survey for choosing an internal audit career was they thought the work would be fun, and with hindsight over 80% of them said they were happy with their choice. The majority wanted to stay in internal audit.

At the top end, only half of the heads of internal audit expected to stay in the profession for the rest of their working lives. But that need not imply any misgivings about internal audit as a career. Many of those who wanted to leave were hoping to move into senior management positions, such as board director, and this has always been a popular reason for getting into internal audit in the first place. It is a good way of building the broad base of business experience needed to reach the higher echelons of general management.

Just about all of the employers in the survey confirmed that this is still the case. Internal audit still offers excellent career benefits, because of its exposure to “big issues and senior staff.” Nine out of ten employers said the internal audit function was an excellent training ground for future managers.

This all suggests that employers should be making plans to offer more attractive salary and benefits packages. If they want to groom the management leaders of tomorrow, or find the right kind of people to work in an increasingly important corporate function, surely they need to get their wallets out.

Yet only a quarter of employers said they were reviewing their reward schemes in order to attract and retain staff. And at the bottom end of the profession’s salary scales, more than half of the employees in the IIA survey earned less than £40,000 a year. That doesn’t sound much, given the claims that employers now make about the importance and corporate value of the role. If they don’t buck their ideas up, they could find it even harder to recruit the kind of people they need in future.