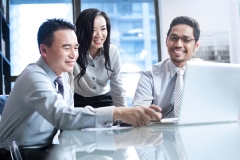 ‘Coaching is the Universal language of change and learning’,

Training and personal coaching are increasingly popular tools that are utilised by companies for supporting the personal development of their staff. Research published by the Chartered Institute of Personnel and Development (CIPD) discovered a respectable 90% of organisations use coaching in some shape or form. Over 500 companies were surveyed, with over half (51%) claiming that coaching their staff was a key part of learning and development.

So, are YOU getting enough?

This article explores what is actually meant by coaching in relation to the audit sector and how it can benefit organisations and individuals within the audit profession.

The question ‘what is coaching?’ is one that does not have a simple or definitive answer. It is something you will inevitably come across it already in its many different forms throughout the course of your life in a number of areas; sports coaching, life coaching, executive coaching and even just the basic skills coaching we go though during our academic education. However, in the context of the work place what we’re actually referring to is non-directive coaching, which is somewhat different to the kind of skills coaching you’d get from Messrs Mourinho, Ferguson and Wenger.

Non-directive coaching has become the "hot" topic of personal, professional, and business development in the 21st century. Why? Simply because the traditional means of support and management have limitations in that the ‘instructor’ knows the answer and imposes their knowledge on to their pupils. In contrast, non-directive coaching is focused on getting the student to come up with answers and solutions themselves. The benefit of this is that it challenges people to think outside the box for themselves and it therefore reinforces the learning process.

Non-directive coaching is sustainable and provides some fantastic long term life skills which are transferable between situations, environments and organisations. The notion of self teaching is the definitive difference between non-directive coaching and the more general types of training such as managing, advising, instructing and demonstrating.

Another benefit of non-directive coaching is that it is not a requirement of the coach to be an expert or more experienced than those they are coaching. The central concept is that of pushing an individual to think in a different way and boost self confidence. Some purists actually claim not having had experience can actually increase the effectiveness of the coaching.

Non directive coaching can be hugely effective in:

How can you apply this to your company?

Quite simply, by asking questions, summarizing and reflecting rather than constantly directing and instructing. This is particularly relevant with audit jobs and all of the skills can really make a difference to your personal performance.

As auditors you should be using these skills every day, they’re the real basics of your role and it is only by asking insightful and intelligent questions you can ever really get to the heart of an issue.

This article was written by our experienced Audit Agony Aunt Carol McLachlan.