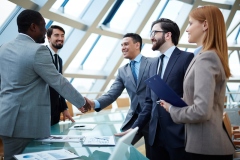 The term company culture became widespread in the late 80s. It is a sociological concept concerning the workplace environment and the movement of employees through this space. A company's personality is shaped by its values and ethics, missions, goals and expectations.

You should think about the concept seriously before you change job, to help your success at work.

Company culture is largely driven by management style. You could be successful in your career in one particular type of company or fail if you find yourself within an organization whose decision-making principles are at odds with your own. Audit careers rely on your compatibility with the inner structures of organisations you are working for. Three of the major decision-making frameworks are as follows.

Levels of power exist on a chain, increasing in an upwardly direction. Decisions are made and movement exists up and down the chain, as people's careers progress. If you are concerned with status, with the chance to move up through a clarified structure and with the chance to one day be the boss, then a hierarchy will suit you. Be wary if you have a problem with authority, though, and aren’t driven by promotion, as you’re probably not going to know who is at the top and the company audit will be rigid.

If you’re a creative person who likes the entrepreneurial culture then this type of pooling culture might suit. When you really believe in a business and want to get involved with many aspects, you’ll build a bird's eye view of the company logic. However, if you like functioning in an isolated, skills-defined team known as a silo, or want to climb a ladder, then this one is not for you.

This is about creating high-performance networks to unlock resources and allow individual talents to be accessed across a broad range of projects. Careers within a dynamic matrix culture break down silos and will mean you could be contributing different things to different projects. It's not a great structure for those who prefer to focus on one thing at a time.

It is worth investing time in a period of self-reflection to ascertain which company culture suits you best. Update your online CV to clearly communicate what it is that you are looking for, and why, and what a potential employer can expect from you.