Conflict Resolution in your Audit Career 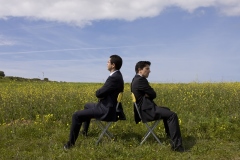 If you’ve been blessed with purely tranquil waters in your audit career, then good on you! But if, like the rest of the population, you navigate through the turbulent waters of complicated people, delicate relationships or outright conflict, this article is for you.

Conflict manifests in all shapes and sizes and many different guises:

With so much scope for conflict, it’s a wonder we ever do anything in harmony!  However conflict is an inevitable part of auditing jobs and life as well.  If you haven’t encountered it before now, you probably soon will!

Conflict is not always bad.  Effectively resolved, conflict can bring personal and professional growth plus an opportunity for constructive change.

As a auditing middle manager, Jenny was performing well. She had a strong, productive relationship with her line manager. They worked together so effectively that they consistently overachieved. As such, the line manager was promoted and moved to another department.

Jenny had no apprehension about the change. She had a strong understanding of her personal objectives and the objectives of the business; she looked forward to the challenge of inducting a new manager into the department.

Unfortunately the reality was somewhat different. Within days she realised things weren’t right. It was clear that she and the new manager had a personality clash. Nothing she did was right, communication broke down and both felt the other lacking. Within weeks, the department’s performance dropped, deadlines were missed and the two were bristling with resentment.

As her coach, I was called upon to resolve the situation. What quickly came to the fore was the extent of Jenny’s relationship with her former management. The two were different personalities and as such brought different strengths to the relationship.

The result was a powerful cooperation where the whole was larger than the sum of the parts. Without her old boss, Jenny had become just one of the parts.

Jenny and I performed a quick analysis to identify the new manager’s strengths as a leader and the value that he brought to the role. This produced a considerable list; Jenny couldn’t help but be impressed. So what was the issue?

It wasn’t what the manager actually did – it was the way that he did it. This realisation was helpful as Jenny could now find a way forward. We then had to look at what Jenny herself was doing, we can’t change other people but we can change our own behaviour.