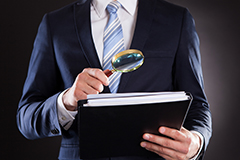 It can and should be very important, suggests Sarah Perrin. Have you ever taken home an extra box of pens or a packet of photocopy paper? Have you ever left work a bit early, but still charged a client? Have you called in sick when you were really just hung over? Have you falsified information – or bluntly speaking, lied – on your CV?

Most of us will have committed at least one of these misdemeanours, some perhaps all. How strongly you feel about their wrongness is an indication of the strength of your moral compass, the nature of your ethical outlook.

For all accountants, perhaps particularly external and internal auditors, having an ethical approach to your work is vital. The importance that ethics holds for the profession has been highlighted recently by the fact that two of the UK accountancy institutes have produced research papers on the topic.

For example, the Scottish institute, ICAS, has conducted a review of nearly 400 pieces of literature on the topic of “Ethics and the Professional Accounting Firm”. Its resulting report describes the commercialisation of accountancy. Much of the literature reviewed by ICAS believes this commercialisation to be the main driver behind a change of ethos in firms – from what the report calls a “predominantly ‘service in the public interest’ mindset to a ‘commercial business, profit maximising’ culture”. The problem is, the report notes, that audit independence is seen as compromised.

Meanwhile, the English institute has been looking at the topic of integrity. It recently published “Reporting with Integrity” which discusses what integrity means, for individuals and organisations. For example, it attempts to clarify the behavioural characteristics associated with a person of integrity, noting that such a person is likely to be honest and truthful, fair, comply with laws, and act in the interests of the wider community. A person of integrity is also likely to be open and adaptable, take corrective action, and demonstrate consistency.

Auditors, it goes without saying, must act with integrity. If they don’t, the whole framework of reporting as we know it will crumble. Investors will doubt the veracity of audit opinions, regulators will become more interfering, capital markets will become unstable.

But what does acting with integrity, behaving ethically, mean for individual careers? It can have devastating consequences. Marta Andreasen, once chief accountant at the European Commission, was suspended for two years and then finally sacked after she blew the whistle about serious weaknesses in Brussels’ accounting procedures. The Commission felt she had breached its trust. Andreasen felt she was doing the right thing, as did many of her peers. She won the Accountancy Age Personality of the Year award in 2003.

This isn’t to say that everyone who acts honestly and sticks to their morals will run into trouble with their employers. The professional firms know that, as the ICAEW’s integrity discussion paper highlights, the personal commitment of firms’ leaders to integrity is essential. Some people call this “tone at the top”. Firms want people with moral fibre who will lead their colleagues by example. Therefore, standing by your principles if you believe something is wrong or needs to be addressed will mark you out as an individual of personal strength and independence of spirit.

You can demonstrate integrity in every aspect of your working life, and that includes the veracity of statements in your CV. It is common knowledge that many people exaggerate their achievements or experience when applying for jobs. They may over-emphasise their role in projects, their involvement in certain industries or technical areas, or their familiarity with various IT packages. Be aware that a good interviewer can catch you out. Trained recruiters, particularly those who apply competency-based interviewing techniques, will stand a good chance of exposing any dramatic overstatements of what you have to offer. Competency-based interviewing is based on the principle that past performance is a good indicator of likely future performance. It uses detailed questions about what you have done to dig down into your past behaviours. As a tip, the more detailed the examples you have ready to hand to demonstrate your ability in the areas you claim, the more likely you are to convince your interviewers that you really are telling the truth.

Auditors, alongside many other professionals, are inevitably faced with situations where they may have an incentive to compromise their integrity. Perhaps a client has asked about the value of upgrading an accounting system. There may be no real need but your firm has an opportunity to sell in IT expertise. Do you go all out for the sale? Perhaps a client is arguing strongly against an increased debt provision. How hard do you push your case for such an increase? Are you willing to compromise in exchange for getting the client to accept an adjustment elsewhere? One of the more telling questions an audit committee can ask an audit partner is, would you have prepared the accounts the same way? That’s not always an easy question to answer.

Reaching a compromise with clients is almost always inevitable. Reaching a compromise with your own integrity may also be. You do need to be clear on your limits. Having spent a few evenings watching the BBC television series of The Apprentice, where ambitious hopefuls compete to win the patronage of Sir Alan Sugar, my view may be jaundiced. It seems that most competitors will do – or say – anything to beat their rivals, gain a sale, and come out on top. But not everyone, and not all the time. One aspirant refused to promote paintings that he believed to be obscene. It seemed a bold stance in that cut-throat environment, and one that could have jeopardised his team’s result, but he stood firm.

Everyone has a moral compass. As a professional, you need to make sure that yours has a strong foundation. Meet the ethical standards expected of you, and you should inspire others and gain your career rewards.

Written by Sarah Perrin for CareersinAudit.com, the leading job site for auditing vacancies.