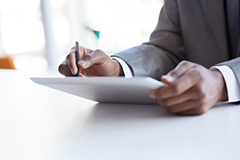 If a young auditor were looking around the globe and wondering where the best long-term prospects were to be found what should they be looking at?

Of, course they would be looking at London, now the fabled global financial centre where fine wine, large remuneration packages, and even sunshine abounds. But that could be short-term. As a journalist I know that if everyone is writing articles extolling the City’s supremacy and power then possibly we are also calling the top of the cycle. And, in any case, this is not how you should assess where you want to spend a sizeable chunk of your career.

Much better, I suggest, would be to look at a paper produced by the European think-tank, Bruegel. This is called ‘The Global Accounting Experiment’ and it provides a very handy guide and background to the astonishing series of events which has now brought us to the brink of having one set of financial reporting rules around the world. It charts the process which has resulted in the International Accounting Standards Board, (IASB), after battling against the most extraordinary political opposition, having now gained a grudging acceptance from the most powerful and most stubborn regulator on earth, the Securities and Exchange Commission in the US.

That in itself is an extraordinary change in attitude. But we are not really talking about that in particular. The Bruegel report provides a lengthy analysis of how we got here in the first place. And it is in that analysis that the issues which ought to be influencing long-term career planning are most clearly laid out.

The report gazes about itself in amazement at the speed with which international financial reporting standards, (IFRS), have taken a hold around the world. ‘The single watershed event behind this dramatic shift’, it says, ‘has been the decision taken by the EU in 2000, in the wake of the Financial Services Action Plan it had announced a few months earlier. That year the European Commission formally proposed the adoption of IFRS as the sole set of standards for the publication of consolidated accounts by publicly-listed companies from 2005 on’.

This decision, with hindsight and also at the time, seems extraordinary. European initiatives are supposed to be inward-looking and their arteries solidly clogged with delay and indecision. But the decision taken was swiftly confirmed, ‘by EU standards’ as the report points out, in July 2002. As a result thousands of European companies released their 2005 financial reporting details under IFRS. And, equally amazingly, many countries around the world followed suit. ‘Even though some of these jurisdictions were gradually harmonising their accounting standards with IFRS’, the report points out, ‘it is unlikely that this would have led to complete convergence without the momentum provided by the EU decision’.

This is the extraordinary point. It was the European leviathan which made the process constitutionally possible. And why was this?

It would be good to say that they saw an enlightened future ahead and they realised that only by providing a common base for investment information across European companies could Europe step forward as a credible and, possibly, powerful economic bloc. It would be nice to think that all the bureaucrats of Brussels suddenly saw this as a way of heading swiftly for the sunlit uplands, because it was the most extraordinary decision. As the report says: ‘Europe’s endorsement of IFRS was a  radical decision: a rare example of EU countries in effect delegating sovereignty to a global body without taking the intermediate step of organising a corresponding function at EU level’.

In other words it succeeded because the EU stepped away from saying we must suck this process in-house and smother it with committees. Instead it effectively out-sourced the process to the IASB. And this has been a huge success. It would be nice to think that this example might act as a blueprint for future EU initiatives. But I doubt whether it will.

But the important point is to look to why the EU took such a decision, and one which seemed to go against all of its culture and previous track record. It was because, and this is unusual for the EU, it realised which way its economies were going. Back in the 1990s it had become very obvious that the largest European companies, and particularly those in Germany, were looking for listings on the major US stock exchanges in their recognition that true global aspirations needed global investor access. The arrival of what was then Daimler-Benz on the New York Stock Exchange in 1993 put this all sharply into focus.

The point was that to list in New York you had to comply with the US rules on financial reporting. And the result of that was that the majority of European countries came to discover and understand that the US financial reporting rules were much tighter than their own. ‘Opinion became widespread, ‘as the Bruegel report says, ‘that accounts in US GAAP could provide investors with higher-value information than accounts prepared in accordance with most national European rules’.

In the past this would have resulted in only one thing – The EU would have set up a huge bureaucratic empire to promulgate, at a snail’s pace, what it thought might be better financial reporting rules. Indeed the EU had produced a series of directives dealing with everything from auditing to financial reporting but the time it had taken and the compromise-riddled nature of the results meant that no one, outside of a hard-core of Brussels folk, saw that as a possibility. So it had to make a hard choice.

It could either say that from hereon in European companies simply filed their accounts under the US rules. Or they could use the processes built up over the previous decade in the UK to create an effective set of international rules which the EU could use. And, as history shows, they took the right decision and handed responsibility to an independent body, the IASB.

So what does this tale tell us about careers in audit, or accounting generally?  It tells us that economic success and the resulting prosperity it brings is often created by an economy, or economic grouping, having the courage to accept the way the tide is flowing. So while checking through the comparative rankings of world cities under the heading of quality of life you should be also checking out how freely the economy of your choice will allow prosperity to grow in the long-term. It is not so much a case of ‘follow the money’. It is more a case of ‘follow the economic imperatives’.

‘The Global Accounting Experiment’, by Nicholas Veron is published in the Bruegel Blueprint Series. Details at www.bruegel.org

Written by Robert Bruce for CareersinAudit.com, May 2007.