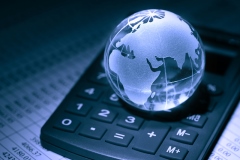 Professional accounting qualifications have long been regarded as a passport to a world of career opportunities - and never more so than today. Globalisation has seen a massive increase in the mobile workforce, with accountants plying their trade in emerging and established markets around the world. Many employers experiencing difficulty attracting home-grown finance talent are undertaking proactive campaigns abroad - and ACCA students are in particular demand.

While uncertainty hangs over the global economy, employers have hardly cut back on hiring activity, according to Angus Braham, a director of search and selection firm, McCann & Braham: 'So far, the 'credit crunch' doesn't appear to have adversely affected opportunities, although some employers are naturally focusing more on business-critical vacancies, and may be more likely to look internally first for other roles.'

But there are still plenty of vacancies available, says Abigail Stevens, managing director of Think Global Recruitment: '2008 has started well for job-hunters, with lots of opportunities available. We're still getting extensive requests to fill vacancies throughout the world. It seems at the moment that companies are continuing to recruit finance professionals, despite the US and other economies going through a squeeze.

'If that squeeze continues, we may see some financial services companies reduce their recruitment activity, and practice firms will start to look at growing their corporate recovery divisions. However, in previous downturns, firms also reduced the number of trainees they admitted, which caused huge shortages of experienced auditors for many years after. It's hoped that they'll have learned from this and not do the same again.'

With a heightened focus on risk and control, there's one group of people for whom an economic downturn need pose no real fear.

'It's interesting to see how the emphasis on internal auditors has changed,' says Braham. 'When the last slowdown occurred in 2001, internal audit was one of the first areas where employers would start to pull staff to cover other positions. These days, the reverse is true - internal audit needs are massive, even where other functions are contracting.'

Max Williamson, chief executive of Careersinaudit.com, says: 'Even if recruitment slows down, it's unlikely that audit teams will shrink; auditors are likely to find that the focus of their work shifts slightly, moving towards safeguarding of assets, for example.

'But notwithstanding recent uncertainty, demand for auditors remains high. In Europe, a shortage prevails in traditional markets such as the UK, France, and Germany. Switzerland and Belgium are also recruiting heavily, due to the large number of US multinationals that use these countries as the base for their regional headquarters. Russia continues to recruit auditors from across the globe to staff and manage its oil and gas organisations. We're also seeing a good appetite for recruiting in offshore markets such as the Cayman Islands and the United Arab Emirates.'

But don't imagine an audit vacancy free-for-all, warns Braham: 'Because other areas of finance are less active, candidates need to be aware that there's more competition for internal audit roles. If you're an auditor in practice and want to switch to industry to be on track for a financial controller role, or work in banking, those positions aren't there in the same volumes. Some ACCA students and members looking to leave practice are now considering internal audit as a stepping stone to senior management. So candidates might have to work a little bit more on preparation and interview technique, as employers won't just take on anyone who comes along.'

But don't despair - if audit isn't your bag, there are plenty of other options. 'Transactions services teams are still looking, although perhaps not for the same volume,' says Braham. 'However, practice firms are still visibly hiring, and even making high-profile presentations on their recruiting plans for the coming year.'

Technical financial specialists are also in demand, particularly in world financial centres: 'Fund accountants and investment accountants are always sought after,' says Stevens. 'Those with experience of product control, tax, and financial accounting will find opportunities.' And demand for the full range of soft skills knows no borders: 'People management, commercial awareness, and leadership ability are all qualities employers desire in their accountants,' she adds.

The ever-expanding role of finance professionals means that accountants who can identify with the bigger commercial picture are top of the wish list for employers importing skills. This is especially true in territories where foreign organisations are setting up camp in order to capitalise on emerging markets, such as India or China. 'We're seeing greater demand for people with financial planning and sales analysis ability for business-facing roles in industry,' says Braham. 'They'll often work alongside senior management and sales teams, where they can make a real impact on the bottom line.'

And, he continues, accountants are increasingly being pulled into non-finance roles for which logical and systematic mindsets are required: 'They're now being hired for operational audit; for instance, they work for international organisations that have been buying companies in different countries and want them all to have uniform systems, applications, and internal processes. Accountants are often the ideal people to make that kind of harmonisation happen.' Operational audit roles would typically involve identifying shortcomings in existing systems and defining remedial actions to bring them into line with global requirements, usually requiring strong relationships to be built with key 'country managers'.

As the global body for professional accountants, ACCA's globetrotting students and members are welcome in every corner of the world.

'Ireland is extremely receptive to ACCA students and members from abroad - especially as it exports so many of its own accountants,' says Braham. 'And Scandinavia is also recruiting - although, while English is mostly used for business by international employers there, you might find it trickier outside the office if you don't speak the local language.'

Last year, scores of employers actively focused their international recruitment efforts on India, but are now casting their nets wider to include the many countries where ACCA student numbers are growing apace. 'Several companies are looking to hire from locations other than India to redress the balance, although New Zealand and smaller cities in Australia still seek Indian-trained accountants,' observes Stevens. 'Chinese-trained accountants are, of course, in demand throughout the world.'

The fact that Eastern European business has enthusiastically embraced ACCA has opened up cross-border opportunities for new members there, says Braham: 'The entire region is busy - and of course, ACCA is highly popular everywhere. We've helped a number of people move from Poland and the Czech Republic into Russia and other former Soviet republics to gain valuable international exposure.'

As Williamson concludes: 'ACCA is an extremely well-respected qualification. In fact, in many central and eastern European countries and in Asia Pacific, it's the preferred qualification and has even superseded national exams.'

Which destinations might surprise as the busiest recruiters of accountants from abroad?

Abigail Stevens, Think Global Recruitment:
'Top of my list are Moscow, Ukraine, and Kazakhstan, which all appear to be booming and require large numbers of accountants, due to business expansion. Expatriates are offered extremely rapid career progression and early responsibility, as well as more interesting and complex work than in many other locations - and great salaries. Culturally, they're also fascinating countries, and offer much more than people imagine.'

'Locations such as Saudi Arabia, Kuwait, and Oman are also places where we're receiving great feedback from accountants who have relocated there. The packages afford superb lifestyles while you gain excellent work experience and career progression.'

Angus Braham, McCann & Braham:
'The Caribbean as a whole doesn't always spring to mind with candidates, as Bermuda and the Cayman Islands tend to dominate - but in places such as Barbados and Trinidad and Tobago, ACCA students are in big demand. And in the Big Four offices on those islands, you'll enjoy more diverse and interesting client portfolios, instead of focusing purely on one industry.'

Max Williamson, Careersinaudit.com:
'My hot tip for 2008 is Greece. The market for auditors there is becoming candidate-led for the first time. Professional services firms want to position Athens as the gateway to south-eastern Europe, and there’s fierce competition among the Big Four. The shipping industry's growth is helping to raise salaries, while the two main banks are both keen to recruit auditors for growing teams.'