Internal Audit Jobs in the Midlands 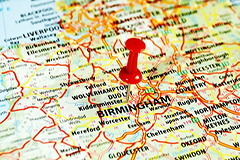 There has been widespread regional market expansion across the Midlands, as a growing number of businesses move their operations out of London in a bid to cut costs. Hiring activity as a result has grown along with this expansion meaning internal audit opportunities in the East Midlands and West Midlands have increased.

According to Hector Cruz, Head of UK Audit for National Grid, “the job market is picking up for internal audit” and in light of new EU directives on privacy laws and the increasing threat of cybercrime “the internal audit arena continues to shift more and more into value added services and not just compliance.” Cruz acknowledges that more than the numbers and processes fundamental to internal audit, information security skills and data analytics are equally as important for professionals wanting to secure internal audit jobs in the Midlands and globally as the issue of cybersecurity prevails worldwide. The National Grid, certainly, are looking to insource their information security audit function.

With regards to industry and manufacture, the Midlands has historically maintained a strong base for distribution and manufacture, particularly in the areas of FMCG and automotive, making areas like Coventry and Birmingham prime locations to sow the seeds of future success. The automotive sector in particular has seen considerable growth, opening up a great number of internal audit vacancies in the Midlands. Cruz explains that the region is undergoing a transformation whereby those in the audit function serve as the grounding for future leaders in the business, who having worked as part of the audit group for a couple of years will then go onto operate in other roles across the business.

Lower living costs and property prices typical in the Midlands, also mean that young professionals are making a strong economic and lifestyle choice when choosing to base themselves away from London and the South East. Opting to work in areas such as, Nottingham, Birmingham, Warwick or Milton Keynes secures candidates a far better quality of life and a more disposable income making it a reality to get a much-coveted foot on the property ladder, without falling behind their London counterparts in the income stakes.

Add to that the fact that the main regional areas are serviced by both domestic and international airports, so the majority of internal auditors based in the Midlands have the freedom to travel nationally and to their organisation’s global entities. More so, these regions are home to many of the top ranking British universities making companies with regional presence top contenders for local and international internal audit talent looking to enter the workforce early on in their careers.

Imparting advice to those looking to secure internal audit jobs in the East Midlands and West Midlands, employers are first looking for an individual’s basic skills, experience and qualifications that prove they can do the job. “After this it’s about industry,” says Cruz, how often the individual has changed companies can send up the red flag with hiring managers and potential employers. “I’m suspicious of frequent changes,” says Cruz, so for positions held less than 2.5 years candidates will need to come up with a reasonable explanation.

The interview stage allows employers to evaluate cultural fit within the team or company the individual is joining and Cruz adds that employers are interested to see “ambition for continuous development of themselves and the company via audit.” This, he says, “is for external hires, for internal hires it’s all about the development, desire and passion.” Cruz further emphasises the importance of technical knowledge, communication and relationships with stakeholders and understanding of true business challenges, and as a final point stresses that a candidate’s personal presentation is the most important thing. “If a candidate is invited to interview, you have overcome the biggest hurdle,” says Cruz, “so don’t let yourself down by not wearing a clean shirt.”