Qualified Auditors: Why moving to Scotland could be the best decision you make in 2015 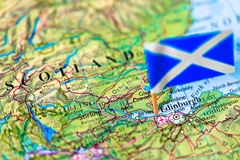 For the past 18 months, Scotland has been in the world’s spotlight most notably the 2014 Commonwealth Games, which saw Glasgow play host to representatives from Commonwealth countries and their sportsmen and women in one of the biggest globally televised events the country has seen.

The world also eagerly followed the Scottish referendum, which had its high and low points, but was a momentous occasion bringing all ages and backgrounds together to take part in one of the most important political events in Scottish and British history. Regardless of outcome, it has shown the world who Scotland is and the very important part it plays in the United Kingdom, and that people here have the freedom of choice.

Relative to Scotland’s size, the country has also been punching above its weight economically. The mainland along with its 790 islands attracts people from all over the world to live and work here. It also attracts global investment and has a large exports trade mainly within manufacturing, with its biggest export markets being the USA, Netherlands, Germany and France. Scotland is also home to one of the largest tourist trades in Europe.

But why would moving to Scotland be a good idea for a newly qualified auditor? Perhaps looking at the three largest cities will help. Aberdeen, home of oil & gas, is a truly international city and the energy capital of Europe. Edinburgh, the capital and second largest Financial Services centre in the UK, with the exception of London, has the strongest economy of any city in the UK. Glasgow, named the UK’s coolest city, is home to shipbuilding, manufacturing and new and developing industries.

Scotland has always fostered the brightest talent. The TV, the telephone, penicillin, steam trains, the fridge in your kitchen? Yes – all Scottish inventions. The further education system, NHS and childcare all renowned for what they offer. With some of the best universities in the world and natural flair for talent, it is a clever place to be.

Scotland’s economy is both diverse and opportunistic. Scotland is a centre of excellence for electronic technologies. It is the fifth largest financial services centre in Europe. It has one of Europe’s most important energy sectors, and there is a highly lucrative life sciences sector, with specialist areas including drug discovery, bio-manufacturing and stem cell sciences. Scotland also continues to break new ground in areas such as; computer and online gaming, literature and the arts, fashion and art, textiles, music and animation. More importantly the best thing about Scotland is the warmth of the people and the international diversity that the country embraces.

Of course career prospects are important but making sure it balances with standard of living is essential. Choosing Scotland over other areas across the UK, particularly London and the South East, can mean more house for your money, lower living costs and access to one of the best in transport links for travel and commuting. Scotland boasts international airports, tram lines, subways, cross-country train links and good old double-decker buses.

Outdoor activities in Scotland are world class. Hill walking, biking and extreme sports are all readily available. Scotland is the home of golf and its people are passionate about football and rugby. It is also an artist’s dream. Art galleries, festivals, music, fashion all feature in Scotland’s colourful cultural landscape.

The Scots are renowned for their hospitality. The country offers a wonderful array of local produce; from salmon and venison to artisan cheeses, whiskies and beers; making Scotland’s food and drink sector a particularly strong one, as well as an inviting place to enjoy a meal.

With all of the above mentioned and the economy growing, opportunities for newly qualified accountants and in particular auditors, are rising and there is a growing demand for international talent. With a demand for Audit Seniors, Internal Auditors and newly qualified Tax professionals to start in 2015, the hunt is on to find the best candidates. Newly qualified Audit Seniors working in Scotland are being offered countless opportunities across global organisations such as Diageo, Heineken, HSBC, Royal Bank of Scotland, HSBC, the Edrington Group, Weir group, SSE, BSkyB, and across different skill sets such commercial finance, business partnering, internal audit and private equity. Scotland could be your future.

Lynn Wight is a consultant with Rutherford Cross, the specialist search and selection firm focussed exclusively on senior finance appointments nationally and internationally.  Lynn has over 10 years’ experience placing Qualified Accounting & Tax professionals all over the world.