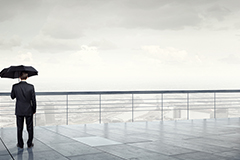 It’s not just the pundits who were expecting a recession this year. Research from CareersinAudit.com back in January revealed that over 40% of British accountants believed a recession would hit the UK the some time in 2008. Many of those were worried about an unwelcome deceleration in career development, and others about redundancy.

While such events have unfolded during the year, the truth is the job market has already shifted in favour of the employer. In the last few years the candidates have had too much power, and that is being redressed. During 2007 CareersinAudit.com, the leading job site for auditing professionals, has seen single candidates receive offers, counter-offers and counter-counter-offers, and this is something unlikely to be repeated in 2008.

Auditors are pretty well insulated against recession but if you are in a small firm, and expecting to be offered partnership over the next twelve or 18 months, it might be time to revise your expectations. Similarly, those thinking about applying for other jobs need to look at the bar again and make sure they’re not pricing themselves out of the market.

Given how quickly the economic situation can change, it’s vital to have yourself in the correct position if you want to maintain career momentum in the down-turn. I have already had two candidates successfully apply for jobs, only for both employers to introduce hiring freezes just before offering a contract (one was in the automotive sector; another was a FTSE-250 construction company).

With this in mind here are seven career ideas for ambitious auditors worried about the recession:

1) If in doubt, opt for a big company
There is a general truth that larger companies are better insulated against recession. Although large companies hit the headlines with redundancy figures, these companies have continued to exist and grow by virtue of their ability to survive down-turns. Neither BP nor Coca-Cola will disappear overnight, but smaller firms might.

2) Do nothing
Consider staying exactly where you are. Companies rarely get rid of their top employees and if you are in this safety zone then you probably have little to worry about.

3) Move to a market with better growth prospects
In Europe that means Greece or Russia. Greece’s growth is being fuelled by its success in positioning itself as the gateway for SE Europe and the appetite of Russia’s Oil & Gas industry for strong finance professionals is set to continue. Even better, native English speakers are valued at a premium and knowledge of local languages is not required.

4) Move to another department
Look at other departments within your firm that look set to grow. Moving from audit to a growing advisory function or from a stagnant division to one which is driving profits may be worth considering. In previous downturns, many auditors have moved to the insolvency department and then returned to audit once the climate improved.

5) Get involved in a major lengthy project
Get yourself stuck into a project which is likely to last for many months and which should be exempt from any redundancies.

6) Don’t choose a risky industry sector
Certain industry sectors are at greater risk than others during a down-turn. Housing and construction is an obvious case in point and we’re already seeing large building companies with hiring freezes, whilst at the same time making significant redundancies. If you do move, look for those with strong brand names in their field, a reputation for quality and excellent customer service.

7) Develop your education
If you’ve always been keen to tackle an MBA, then this may also be the time to start filling out application forms. Hopefully your graduation will tie in perfectly with an up-turn in the economy and see you well-equipped to take full advantage. But be warned, timing is crucial here and difficult to predict. In the last down-turn, even many INSEAD graduates found themselves struggling to find a suitable role.

Whether you’re worried about your career prospects or not, if there’s one thing every auditor should be doing, it’s strengthening their professional network. With companies looking to reduce costs in all departments, hiring managers and heads of department will examine their networks and the networks of other friends and colleagues in an attempt to avoid costly recruitment fees. It’s also important to maintain a good online profile through specialist job boards or networking tools such as LinkedIn and XING.

Max Williamson is an ex-Enron auditor and director of CareersinAudit.com

Featured on AccountingWEB 5th February 2008 & amended for In Business, November 2008.