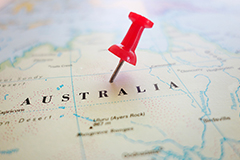 We have so far covered Russia, Greece, France, the Middle East, Eastern Europe, the Cayman Islands and Spain. If you would like to know more about working in these regions, please see the appropriate articles.

Is there anyone working in finance who doesn’t know at least one person who has spent some time in Australia? A secondment to Australia has almost become a rite of passage for many newly qualified UK accountants, most of whom are drawn towards the country on the basis of its excellent work/ life balance, and the almost universal positive feedback of others who have worked there.

Most UK accountants will be aware that salary levels are lower than they are in the UK, but are equally likely to be aware of the fact that the cost of living is also lower. Greg Haskins, an ex-Big 4 Director and now a Director of the Australia recruitment specialist My Departure Lounge, advises that those wishing to move to Australia should, “gauge local salaries based on cost of living and real purchasing power rather than try to convert back to Sterling.” Salaries for newly-qualified accountants can be up to AUS$70- 75,000 and you can expect to lose approximately 20- 32% in taxation, subject to your personal circumstances. Expats can benefit from an additional tax incentive known as the Living Away From Home Allowance (‘LAFHA’), which can significantly reduce an expat’s tax liability and provide more disposable income for other items such as housing. For those looking to move to Australia for the long term, it’s also worth pointing out that there are a number of incentives to establish a permanent base in Australia, including a first time home owner’s allowance.

The short term benefits of working as an accountant or auditor in Australia are pretty well documented, but these would certainly include excellent career prospects, unique tax incentives for expats and a lifestyle that is particularly well suited to those with an interest in sport and outdoor pursuits.

For those who have an eye on the recession and are concerned about the likely impact on the market, Greg Haskins comments that, “Australia boasts one of the strongest economies with a strong resources sector which is still booming. Although growth may slow in the coming months, there is set to be a continuation of new audit and accountancy roles across the country given the transient nature of the existing workforce of professional accountants.”

Naturally, there are variations between the major cities and people may find that one city is better suited to them than others. As a general rule, auditors and accountants looking to work in financial services will head towards Sydney and Melbourne. Those with an interest in areas such as mining and natural resources will gravitate towards Western Australia. Brisbane and Adelaide tend to be the most popular among those with families, whilst Sydney and Melbourne offer the standard city slicker package.

However, there are as always a few cautionary points to consider. For example, those who qualify for the LAFHA tend to gear their lives based on the relatively high level of disposable income they receive. If they decide to remain in Australia beyond the terms of the LAFHA, they can be caught out by living expenses that are simply too high. It’s also worth pointing out that accountants are generally more highly regarded in the UK than they are in Australia. Law enjoys a far higher profile than accountancy and employers are less likely to see the wider commercial skill set and business acumen that a qualified accountant or auditor can provide. This means that the content of roles available outside the world of public practice is not as interesting as it would be in the UK. Thirdly, whilst the international community is a draw for many from the UK, it can also be a hidden trap. Those who do not make enough effort to integrate themselves socially and professionally with Australians may suffer in the short- medium term as they see their social life struggling to cope with the constant comings and goings of a transient expat community.

However, those relatively minor points aside, Australia looks likely to be the location of choice for many UK accountants for many years to come.

This special Region Focus was written by CareersinAudit.com with the help of Greg Haskins, ex-Big 4 director and now director of My Departure Lounge in Sydney.

Keep up-to-date with all the audit vacancies in Australia by registering for email alerts. For more information, click here.