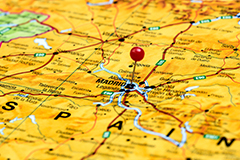 We have so far covered Russia, Greece, France, the Middle East, Eastern Europe, the Cayman Islands and Australia. If you would like to know more about working in these regions, please see the appropriate articles.

With soaring food costs, falling house prices, and a weak pound, it’s not hard to see why many in the UK are looking across the seas for a new start and a new career. According to the World Bank, Spain's economy is the eighth largest worldwide and the fifth largest in Europe. Its nightlife, festivals, architecture and food are famous throughout the world, and many regions offer around 300 days of sunshine a year. Yet is Spain a good choice for those tempted to up-sticks and relocate abroad as an accountant?

Spain has its obvious perks: world-class restaurants, shopping, museums, beaches, art galleries, and premier sporting facilities and, prior to London’s recent dominance as ‘most desirable place to work’, was the most sought after work location in Europe,. Many audit and accountancy candidates harboured an interest to work in one of Spain’s two main cosmopolitan metropolises, Madrid and Barcelona, and without the need to have an umbrella by your side at all times, it’s easy to see why Spain had such an appeal.

Most wanted to move there for what they considered would be a good work/life balance and Spain undoubtedly offers this. According to a survey commissioned by uSwitch earlier this year, Spain came out top in offering the best quality of life in Europe - its citizens enjoy shorter working hours and more days holiday per year.

However, comparatively low salary levels coupled with some high tax costs and social deductions means that Spain is far less popular than it was. For example, newly qualified accountants can expect to lose over 45% from a salary of approximately €43,000. Those moving to Spain can expect a similar salary and as the country is within the EU, very little assistance is provided with regard to relocation costs. Candidates can expect the cost of their initial flight to be covered and some assistance with the removal of goods, but very little beyond that.

Spain, in common with its neighbour France, really does require some ability in the local language in order to ensure social integration and professional career development. Without it, both will be difficult. Spanish companies do tend to favour recruiting and promoting Spanish nationals and it can be relatively difficult for a non-Spanish speaking expatriate to make a long term impact.

There is also a genuine shortage of American multinationals that have chosen to locate their regional HQ in the country. Whilst Switzerland, Belgium, Germany and France can boast many, Spain has only a few, one of which is the consumer goods multinational Sara Lee.

For those without the Spanish language, you are advised to consider working for one of the ‘Big 4’ practice firms. The ‘Big 4’ are well established in Spain and, when compared with other possible companies they have relatively international environments as well as strong reputations.

If a move to the ‘Big 4’ does not interest you, then the next best move would be into one of the many banks or insurance companies in Madrid, or one of the well-known blue chip companies Spain boasts. Banco Santander, Spain’s largest bank is also the second largest bank in Europe in terms of market capitalization. SEAT, the car manufacturer, based in Martorell, Catalonia employs 14,500. Inditex, one of the world's largest fashion groups, based in A Coruña owns brands like Zara and Massimo Dutti and employs 76,000. Industrial and commercial companies, most of which cluster around Barcelona, tend to be more parochial in their recruitment and therefore of less interest to those seeking international career development.

For those going through an interview process for a job in Spain, your watchwords should be patience and perseverance. Spanish interviews tend to take far longer to complete than anywhere else in Europe, so you shouldn’t necessarily misread the signs if things are beginning to drag. The interview processes tend to be led by Human Resources teams and line managers tend not to involve themselves.

For the lucky few, Spain offers the chance to combine sunshine with career advancement. However, for the majority of audit professionals, securing work in Spain is a complicated and laborious process that often ends fruitlessly. It seems if you do want to enjoy sangria and sunshine, then like everyone else, you’ll have to call into your local travel agent!

Written by CareersinAudit.com and featured on AccountingWEB.

Keep up-to-date with all the audit vacancies in Spain and Iberia by registering for email alerts. For more information, click here.