Should I Stay or Should I Go? Survey 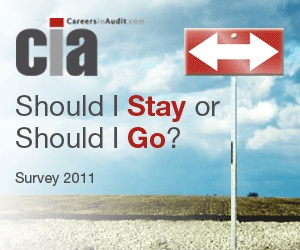 The 2011 annual CareersinAudit.com survey investigated what influenced audit and accountancy professionals across the world to change jobs and we asked for your views on various elements that lead to the decision to relocate:

We received a great response to this survey with over 1700 audit and accountancy professionals taking part. A summary of the results is detailed below:

Partners in accountancy firms and in-house financial departments must move career development to the top of the priority list or face losing valuable staff in the near future, warns Max Williamson, a Director at CareersinAudit.com.

More than 1700 accountants have taken part in a research study by CareersinAudit.com entitled ‘Should I Stay or Should I Go?’ which uncovered that 40% are already looking for another job, with 18% stating they will be looking for one within 6 months and a further 13% between 6-12 months.

Of those accountants wanting to leave their jobs immediately, 30% are setting their sights on jobs abroad, believing that career progression will be better than at home. Out of all the respondents, 85% would consider moving abroad for a new job, and would be prepared to learn a new language if the job required it. The most popular areas with job-seekers looking to move away from their home were Western Europe (22%), the Middle East (16%) and Australia and New Zealand (14%).

Career development has emerged as a strong contributing factor to job satisfaction, with eight in ten of the accountants surveyed believing their company is not doing enough to help with career development, and four in ten stating that career development is low on the company’s priorities. The number of respondents who felt their bosses were failing to encourage and nurture employees remained the same as last year’s study, ‘On the Road to Recovery’, with 77% wanting more guidance & support from their superiors.

Max Williamson, adds: “2011 has seen a clear improvement in the audit job market, with the financial services sector and the Big 4 driving demand. Companies cannot keep ignoring the issue of career development. They need to make greater efforts if they wish to retain their top performers.”

“There is still a chance though – nearly half the respondents of this year’s research said a pay rise, promotion and better benefits could make them stay, with a further quarter wanting the option to relocate internationally within the firm.”

“However, it should also be noted that job seekers must also avoid complacency. Due to the lack of opportunities over the last 2 years, these roles are receiving many applications and competition remains high.”

Other observations from the research include:

The study ‘Should I Stay or Should I Go?’ was conducted amongst 1701 accountants during September 2011.