Survey Results: Battle of the Sexes 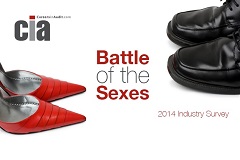 The accountancy profession has always been a natural career choice for those who have an interest in business and finance. For others, it means a guaranteed solid career, whilst there are those who see the training and experience as providing a great foundation for running their own business later on in their working lives.

Yet, finding the right firm to embark and progress your career can often prove challenging. Will it give you the right salary and position you are looking for? What opportunities will there be to progress your career and in what time frame? Is the work culture one of long hours or does it seem to be a place that offers a good work-life balance? Are you going to be happy working there for two, five or even ten years from now?

Now in its fifth year, the CareersinAudit.com annual industry research takes a closer look at whether today’s accountants are fulfilled in their current roles and what career satisfaction means to them. How prepared are they to make do with the status-quo and, if not, when do they intend to make their next move? The research also examines what would make them stay and how their employer is addressing their career needs, if at all.

More than 1,450 accountants took part in the research between August–September 2014, including recently qualifieds, auditors, senior auditors, audit managers, compliance professionals, risk managers, senior audit managers, financial controllers, CFOs, financial directors, internal audit directors and partners. Each year the research also looks at a topical employment theme and what bearing it has amongst the profession. This year it focused on the subject of the ‘Battle of the Sexes’ in the workplace, with a particular focus on the gender pay divide. It’s always going to be an emotive issue, even in accountancy.

No matter what industry you work in, very few of us will work for one company throughout our entire career. Sometimes that decision is taken out of our hands; economic climate and/or poor performance of a company, can force redundancies. But what forces us to move on quicker than we anticipated?

Perhaps we don’t like the corporate culture of the company or perhaps we have a personality clash with our boss or line manager, which simply can’t be resolved. For most though it’s the disappointment of not getting rewarded for the hard work and often long hours we put in for an organisation.

Whilst there seems to be less immediacy of looking for a job compared to five years ago, auditors and accountants are not prepared to simply ‘make-do’ with their lot. A third are already actively looking for a job but this will rise to nearly two thirds by September 2015.

In 2012, the top reason cited for finding a new job was wanting to work abroad. This still fares as one of the key reasons because of the increasing global demand for good audit, risk and compliance professionals. However, not receiving a pay rise or promotion is now the top reason for moving on. Some professionals put the pause button on their career during the global financial crisis, biding their time and hoping that recognition (in terms of a salary raise or a promotion to the next role up) would come about 2013. Bosses have been slow to deliver their side of the bargain, so we could see an exodus of staff leaving their roles in 2014 and 2015.

With so many set to be looking for another job within a year, senior management and HR departments should be concerned about potentially losing some of their star performers. Sometimes there will be nothing that can be done to change a person’s mind — they’ve thought long and hard and there’s no going back. Yet nearly half of those looking said they could be lured back if the rewards were good enough. Others (14.2%) are not looking for a rise in job status or money. It is about having a good work-life balance. Some could be tempted back with the offer of relocating internationally (11.1%) — which may be another way of getting a more balanced lifestyle as well as opening doors to a job that expands their skill-set. 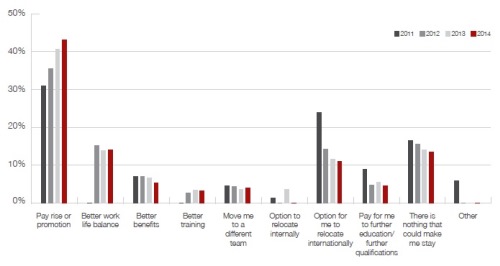 Demand for highly skilled auditors and accountants has never been greater. The role of an accountant is now far more than a ‘number cruncher’. The industry has seen a greater shift to more technically specialised roles and a need for technical skills, largely driven by an increase in regulation and business complexity. Increasingly, accountants are being called in to support important strategic decisions for the business or their clients as well.

There is now a far greater need for the profession to have more softer/business awareness skills and not just core accountancy theory. Yet, year on year, our research clearly indicates that accountancy bosses fail to provide necessary training and mentoring for their staff.

According to nearly two thirds of respondents, career development isn’t seen to be high on the agenda at their company and companies do not provide adequate training and support. With six in ten accountants revealing they have a five year plan in place, many would welcome a structured career program when they join the company. This could be then monitored to chart what training and other skills are necessary to ensure they stand a chance of a promotion/pay rise. Others would welcome mentoring/coaching, face to face feedback and funding for professional qualifications.

Fortunately, today’s accountants are not going to be held back by the career disappointments of no pay rise or promotion. It could be said that many accountants are taking the view that ‘If at first you don’t succeed, then set your sights further afield’. Indeed eight in ten accountants would consider moving abroad for their next position, with better work-life balance, career progression and salary sited as the reasons for doing so.

Western Europe, the UK, Australia and New Zealand remain career hot-spots. North America and the Middle East are also marked out as key destinations, although the popularity of the US seems to have waned since last year. It is likely that heightened political tension in the Middle East has already had an affect on career decisions and will do in the short term future – in 2010 19.5% wanted to venture of to the region (the second most popular region). In 2014, the figure has dropped to 10.5% (ranked fifth in the hotspot table). 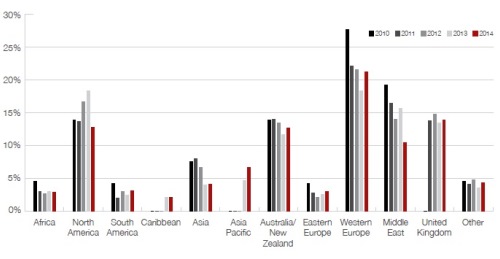 Battle of the Sexes – the great gender pay divide

Regardless of the industry you work in, the ongoing battle between the sexes regarding equal pay and opportunities isn’t going away any time soon. Our research shows that those working in accountancy are by no means immune.

When accountants were asked to give more detailed responses as to why they felt such disparity exists, some felt it is because ‘employers can get away with it’ and there is a social pressure for women to stay
‘content with what they get’. Others believe men have the ‘guts to ask for pay rises’ and it is ‘more in their nature to negotiate a package, whereas women lack the confidence to ask’. As one accountant said ‘When men ask for a promotion/ pay rise they are seen as ambitious but women are seen as pushy and it goes against them’. Others believe that career breaks and family commitments are the main reason for the divide.

Do you believe there is a disparity in pay between men and women doing the same job in your industry?

Attracting people to join the accountancy profession has never been a problem. Yet more than a third of accountants are expecting to leave the profession within the next 3-5 years and this rises to 54% within the next 6-10 years. Perhaps more needs to be done by the industry and companies at a much earlier stage to motivate a greater number to stay. 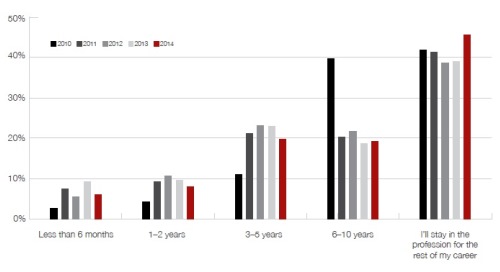 In 2014, many more auditors and accountants can be ambitious compared to their counterparts, say forty years ago.

There are more opportunities and more varied roles — both on their home turf or further afield. If bosses fail to reward their hard work with a pay-rise or promotion, then they will find another company that does, set up their own business or even start a new career.

If those at the top want to retain ‘indispensable staff’ they will need to work much harder over the coming months and years to ensure that clear career development programs are put in place and that training and mentoring moves higher up the company agenda.

To request a PDF copy of the 2014 'Battle of the Sexes' survey results, please click here