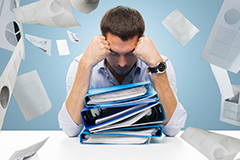 Workplace rivalry is mounting in the accountancy profession with seven in ten accountants (69%) admitting that colleagues have become increasingly more competitive in a bid to keep their jobs, according to a survey conducted by CareersinAudit.com – the leading job-board for audit professionals across the globe.

The survey “Beating the Recession Blues”, which was conducted between 3rd March–1 April 09 amongst 520 accountants, revealed that more than half (59%) of accountants are worried about losing their job and nearly a quarter of these (22%) are constantly worried about losing their job.  This is fuelled by their reports that 42% of all respondents’ firms have made accountants redundant in the last six months and 15% of these been in the last month.

Nearly half of all respondents (45%) are regularly putting in longer hours each week as the recession bites, despite there being no evidence of more work to do;  36% of whom are working at least  7 hours extra hours per week.  Four in ten accountants (39%) also admitted that they would be prepared to take a pay cut to keep their current job.

“The survey confirms what has been reported to us anecdotally for some time.  The recession is forcing accountants to work harder and the fear of job losses is driving increased workplace rivalry.  For some, the effects of this recession are more debilitating as they losing sleep at the prospect of being made redundant. Employers need to handle the issue of motivating staff in a difficult economic climate and ensure that processes are put in place to alleviate stress in the workplace.

“Whilst many do feel trapped in their career at present, it is very interesting to discover just how many would be prepared to move abroad, learn a new language or another skill.  Should redundancy strike anyone in the profession, my advice would be to take heart and realise that one can turn a seemingly adverse situation to an opportunity, be that working in the Middle East, becoming proficient in Cantonese or even setting up one’s own business.”