Survey Results: Ethics - What is your Moral Compass? 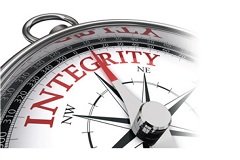 In the wake of a number of corporate scandals this millennium, Enron and WorldCom arguably being the most notable, the question of ethics and professional standards for the accounting profession has understandably come under much greater scrutiny.

To some degree, different industry bodies and governments have been proactively tackling this issue over the past decade. For example, in the UK there has been a spate of legislative measures including the Companies Act 2006 requiring each director ‘to exercise reasonable care, skill and diligence’ and The Bribery Act 2010 which requires all UK based companies that export, (or plan to export) goods and/or services to be able to demonstrate that they have implemented ‘adequate procedures’ to prevent corrupt practices by staff and anyone else who works on their behalf from giving or receiving bribes. Most recently, The Enterprise and Regulatory Reform Act 2013 introduced the ‘Whistleblowing’ legislation.

Meanwhile international bodies such as the International Federation of Accountants (IFAC) and its many member associations and institutes, have identified certain ethical principles as being of crucial importance to the profession. These include integrity, objectivity, professional competence and due care, confidentiality, and professional behaviour. However, ethics tokenism (simply identifying and articulating them) is not enough. In order to put them into practice, organisations need to adopt values that will adhere to the principles and maintain the confidence of stakeholders.

Progress has been made, but of course the ‘moral compass’ at work still has many grey areas and it is up to the individual organisation what they choose to enforce. This year, the annual CareersinAudit.com research study probed further. During July–September 2015, we asked more than 1,700 accountants across the globe, including recently-qualifieds, auditors, analysts, audit seniors, audit managers, senior audit managers, assurance managers, compliance managers, risk managers, financial controllers, CFOs, financial directors and partners a series of questions around what action they would take if they suspected unethical activity in their organisation. We also enquired as to whether they believe their organisation may not have acted independently from the commercial pressures faced by their clients or within the business. The research also looked at whether enough is being done to protect whistleblowers and their views on whether intimate relationships within the office are acceptable. We may think we share the same moral compass at work but, in reality, are they poles apart?

Finally, our report would not be complete without including our year-on-year trends focusing on when people in the marketplace are going to actively look for a new job and the reasons for doing so. We also investigate what would make them stay, how many would consider working abroad and if so what are the current destination hot spots for jobseekers in 2015. As always, please get in touch if you have any questions about the results or our analysis and we will be more than happy to discuss this further. 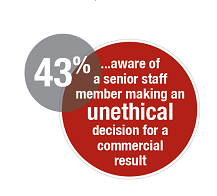 Despite the fallout from a spate of high profile corporate scandals, it would appear that the accountancy profession is still not squeaky clean with all its working practices. 20% of respondents believe between 10–20% of those in the profession have helped their clients create a set of accounts that are deliberately misleading. A further 10% believe more than a quarter of the profession have been acting unethically and 5% believe half of the profession are not acting with integrity over client accounts. Furthermore, nearly half (49%) of respondents have known of a specific situation where a colleague has been pressurised by a line manager or a partner to ignore an adjustment that should have been made to a set of accounts.

It would appear that senior members within certain organisations are not leading by example, with just under half of respondents (43%) aware that a senior staff member within their company had deliberately chosen a commercial result for the business/client, despite that fact that the decision could be unethical.

The right environment to blow the whistle? 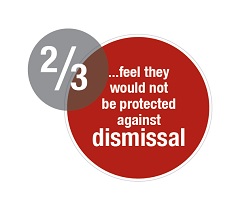 Whilst many in the profession are only too aware that practices at work are not always pointing to the right side of the moral compass, sadly it appears they do not feel comfortable being a whistleblower – defined as ‘one who exposes any kind of information or activity that is deemed illegal, dishonest, or not correct within an organisation that is either private or public’.

Indeed, more than two thirds of those in the profession believe that if an employee were to report the misconduct of a colleague they would not be protected against victimisation or dismissal, and more than half of respondents (57%) felt they could be targeted or lose their job if they were to report the wrongdoing of a client.

Perhaps the biggest call to action for employers is to make sure the business has a whistleblowing policy in place to ensure that staff are not fearful of exposing unethical practices. Otherwise, it’s a catch-22 situation where staff remain quiet to keep their jobs intact and avoid victimisation, whilst other staff leave behind a trail of unethical practices.

Industry bodies need to up the ante/punishments

When it comes down to punishments, the majority (55%) believe offenders who deliberately sign off a misleading set of accounts should be banned from practising in their profession, a further 17% felt they should be fired from their job and just over a tenth of respondents (13%) believe that the guilty party should be sent to prison.

The majority (53%) also believe that ethical standards would be strengthened if the profession adopted a tougher stance and was governed by rules rather than principles. 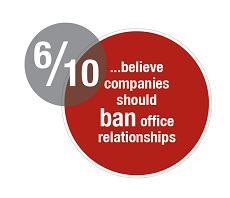 Whilst policies can be introduced to mitigate risk against corrupt or unethical practices at work, what can be said for relationships in the workplace? Should employers keep a tight rein on intimate relationships taking place between other staff within the company as well as with clients?

Others believe that an inter-office relationship behind the scenes can come across as unprofessional and believe disclosure is paramount. 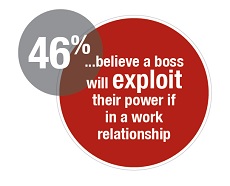 The level of seniority also came into question, nearly half (46%) felt a boss is exploiting his/her power if they have an intimate relationship with a more junior member of staff. This could pose further problems with the junior member further down the line, if he or she didn’t want to continue in the relationship and was worried about their career being compromised within that organisation. Although on the flip-side, it could be argued that the junior member could also be exploiting the situation to fast-track their career.

More than half (54%) would not keep quiet if they knew about an inter-office relationship taking place, either choosing to report it to their line manager, saying something to one or both of the people concerned and even taking it to the top of the organisation believing it could impact on the work environment and affect team productivity.

Whilst nearly two thirds do not think it’s acceptable for a client facing staff member to have intimate relationships with a client, more than a third think it’s fine as long as it is not someone directly in the client team.

But of course, lines can be blurred over what is acceptable, when and with whom. Plus not all relationships that start in the workplace are going to end happily ever after, therefore employers and line managers need to consider how to mitigate against any possible fall-out and what the potential impact could be on the business. Business owners should think about establishing a work place relationships policy to identify the roles that may need disclosure on relationships. The policy can also outline an employee duty to disclose information if there was a potential conflict of interest or a threat to the employer’s business, as well as prohibiting intimate behaviour at work.

The Moral Compass - Our Conclusion

Maintaining a level of ethical conduct goes above and beyond legal requirements, however there is a school of thought that believes accountants tend to focus on the technical issues and lack ethical sensitivity to recognise ethical dilemmas involved with their work, which could ultimately lead to making wrong decisions. Accountants could be trained to identify the moral dimension of seemingly technical issues.

Employers should strongly consider drawing up clear ethical policies so staff are aware of when they may be ‘crossing the line’, the penalty for breaching this and the importance of disclosure. At the same time, employers also need to create an environment where staff are not fearful to come forward should they suspect unethical behaviour has taken or is taking place.

When we first ran our research back in 2010, many countries were in the midst of an economic decline. Pay freezes and redundancies were a plenty and perhaps the two biggest drivers for nearly half of respondents immediately looking for a new job. With a better economic outlook in 2015, things seem to have settled down and for the last couple of years, there seems to be less immediate need to leave, although more than a third are still looking right now. Within a year, nearly two thirds of respondents will be actively searching for a different role.

Whilst money and status are always going to feature high on the candidates’ list for why they are leaving, it is interesting to note that the top reason this year (30%) for seeking new role is because they are keen to work abroad, this was followed by the fact they have not been promoted or received a pay rise when they believe they should have. There was also a marked increase in employees expressing dissatisfaction around the working environment and 16.9% (up by 6% from last year) said their reason for wanting to leave is because they do not like their current company’s culture.

Clearly there is some work to be done if employers want to retain star employees. This could be achieved by providing opportunities for staff to work abroad as well as making sure there is a clear career path set out so they can work towards their goals of getting a promotion or pay rise. Of course it’s not just down to specific work goals, as increasingly many employees are looking for a better work/ life balance. They also want to enjoy coming into work, along with the perks and non-financial benefits that come with the job. 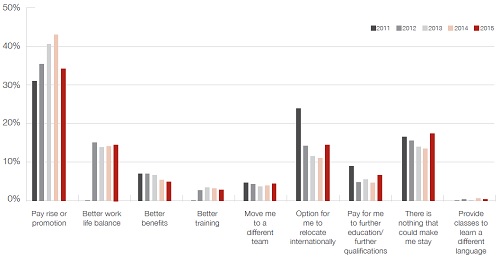 This year, working abroad was stated as the top reason for wanting to leave one’s current job. Increasingly many are now recognising that a move abroad is a good way to progress one’s career and not just a side-step, although a better/work life balance continues to be the biggest lure for those looking to work overseas.

Whilst Western Europe, United Kingdom, North America and Australia/New Zealand continue to be the top career destination hotspots, it is interesting to see that the Middle East has also regained popularity and climbed back into the top 4 rankings for desired places to work after a sharp decline at the start of the global financial crisis years. There has been huge economic growth in the region over the past few years, even with the recent question mark of oil prices and the negative effect on Dubai’s construction industry from the GFC. But with plans underway for the Fifa World Cup in Qatar in 2022 and Dubai hosting the World Expo in 2020, the demand for jobs in the region is likely to get even bigger over the next few years. 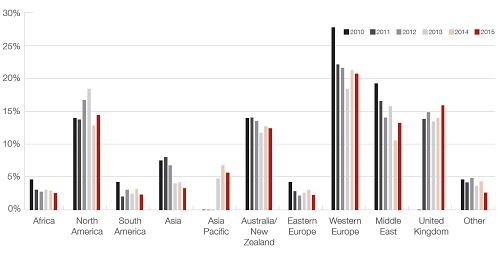 To download a PDF copy of the 2015 'Ethics: What is your Moral Compass?' survey results, please click here