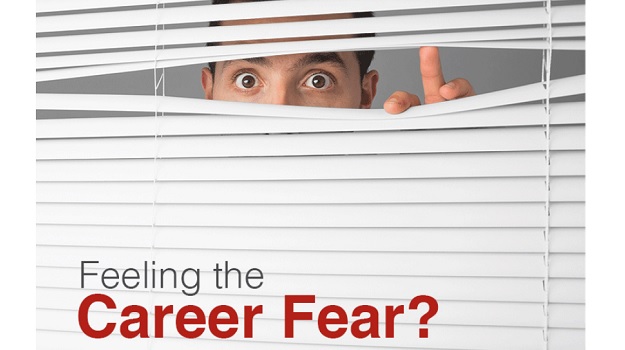 By their own admission, auditors and accountants are a conservative breed. Perhaps it’s a combination of having an accuracy mindset and a dislike of ambiguity and risk. Yet, whilst those in the profession can find certainty auditing the numbers, there may be less guarantees and more unexpected challenges as they progress along their career path.

It is often said that the way a person successfully navigates their career is down to a combination of talent, hard work and even luck. Others would make the claim that it is also about having a fearless attitude, and being able to adapt to change and embrace new opportunities. For this year’s research, CareersinAudit.com investigated the degree to which fear takes hold of auditors and accountants in different areas of their career.

The global study of 1,341 audit and accountancy professionals aged 18–65, looked at a range of fear-related issues, including the interview process, networking, moving from industry to practice and visa versa, the ever-changing role of the accountant, whether technology and automation will be a big threat, running one’s own business and, of course a change which is certain (even if the details aren’t) — Brexit.

Now in its 7th year, the report includes year-on-year trends comparing when and why professionals in the marketplace are going to move jobs, the reasons for doing so, what would make them stay, how many would consider working abroad and if so, what are the current destination hot spots? You may be surprised by the results.

Feel the fear and interview anyway? 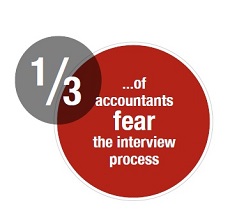 Like them or loathe them, interviews for a new job or a new role are a necessary process most will have to go through in order to move onwards and upwards in one’s career. In our research, a third of accountants revealed that they fear the interview process; 41% amongst accountants aged 18–30, perhaps not surprising given they have less experience in the workplace.

Indeed, interview fear is such an issue within the profession, in so much that a fifth of all auditors and accountants surveyed admitted they would rather stay in their current job (even if unhappy), than move to a new organisation if the new position required an interview first.

From earlier research CareersinAudit.com conducted on interviews, we know that fear can manifest with a number of physical symptoms ahead of the interview including butterflies in the stomach, insomnia and loss of appetite. As with any interview, preparation, including thorough research, is crucial to feeling on top of the process. Yet, combatting the fear will mean that the candidate not only demonstrates their technical ability for the role but also confidence to show their true personality.

The changing role of the accountant – will you still be here tomorrow?

The days of an accountant being solely a number cruncher are gone. Today’s accountant needs to be armed with a much broader range of skills including management, business advisory, technology and new business development skills. Many in the profession are acutely aware of this change (82%), yet nearly four in ten (39%) accountants are worried they will be left behind because they don’t have the right skill-set to survive in this ever-adapting industry. To add to this issue, 39% are concerned that automation and technology will render their jobs obsolete in the coming years. Yet the tech savvy generation of accountants, aged 18–30, believe there is an even bigger threat – just under half (49%) are worried that their roles could become obsolete as technology becomes increasingly more sophisticated.

There has never been a more important time for accountants to build up their skill-set and embrace rather than fear these changes. However, employees can’t leave it to chance that bosses or HR directors will fill the gap by providing relevant training or sending them on courses. We know from our year-on-year research that nearly two thirds of accountants believe career development and progression is not high on the accountant boss’ agenda. With this in mind, auditors and accountants will need to take a far more proactive stance by bringing up specific training courses with their line managers or even investing time and money independently, outside the workplace to stay ahead of the competition.

Working the room – the resistance to networking

For the more gregarious personality, business networking is no more daunting than meeting a good friend for dinner or a drink. Despite 72% of accountants enjoying networking events, more than a quarter actually dread attending, with some even pretending to be sick, stating that they don’t like talking to strangers, are introverted, and feel uncomfortable or awkward in these social situations. Yet in an increasingly competitive marketplace where the onus will be on building up new areas of expertise and bringing in new business, it is crucial that accountants are armed with skills to grow their contact base outside the office. Some people may be naturals at working the room but more companies could be providing training workshops to help those with inhibitions, such as ‘breaking into a group’ and also ‘steering a conversation’. In time what might be deemed an isolating and fearful experience could be turned into a positive and incredibly useful event. 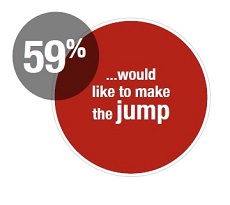 Making the jump to practice or industry

Whether accountants are working within practice or industry, it seems the majority (59%) would like to make a career change and cross over to the other side. Despite the desire to swap places, nearly half (43%) admitted there are issues which are holding them back from progressing to the next stage. More than a quarter (26%) felt that it was too risky an economic climate, and a fifth (20%) believe they did not have the right skills. A further 17% are worried that it would not be as they imagined and 12% believe that there is too much competition. 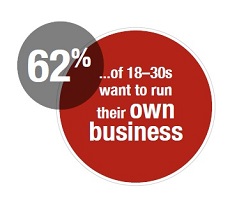 Yet for all the excuses as to why many would not cross to industry or vice versa, it seems the majority (51%) are willing to take the risk of setting up their own business although timing will play a bit part. The generation of 18–30 accountants are even more determined (62%) to leave the profession at some stage and follow their entrepreneurial dreams. More than a tenth of all accountants plan to set up their own business within a year, nearly a fifth (19%) plan to do so within two–three years and a further 31% within five years. The top reasons for waiting are to build up funds (38%) and current family commitments (21%).

Brexit – has fear and worry set in amongst the profession?

Ever since the UK referendum voted in favour of leaving the European Union, there has been a sea of commentary and analysis as to how this will impact on people’s personal and working lives in the UK and across the globe. With uncertainty about the exact date and indeed how this will all pan out, we were keen to find out whether Brexit is a big worry for the profession. Contrary to our expectations, less than a fifth are actually worried about Brexit and the potential fall-out. Those that have concerns believe there will be less opportunities to work abroad, limited access to work permits or they could lose their job within the next two years.

Even with current uncertainty, the reality is that highly skilled professionals with the desirable expertise and qualifications, will still find opportunities. Accountants with regulatory experience, together with internal auditors, IT auditors and management accountants continue to be among the highest paying accounting jobs as demand for these roles refuses to wane and the pool of experienced candidates remains limited. 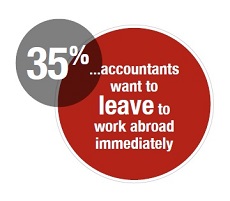 Bosses watch out! This year’s figures show the highest percentage of accountants currently looking for a job since 2011 and four in ten are going for interviews or actively looking now. In 2014 the top reason cited for looking for a new job was ‘not been given the pay rise or promotion’. Whilst the second top reason that year was to get a job abroad, there have been some interesting and marked changes over the past two years. In 2015, getting a job abroad became the top reason for leaving (30%) and this year more than a third (35%) have cited this reason for wanting to leave. Amongst auditors and accountants aged 18-30 this percentage increases to a huge 52%.

If bosses want to retain their star auditors or accountants for the long term, then the lure of a pay rise or a promotion still tops the league for what could make them stay (31%). Although the same number collectively would prefer a better work life balance or for their bosses to look at the options available to them internationally.

That said, with Brexit on the horizon, it will be interesting to see how many stay or go regardless, because they simply need a different challenge.

What is the main reason for looking for a new job? 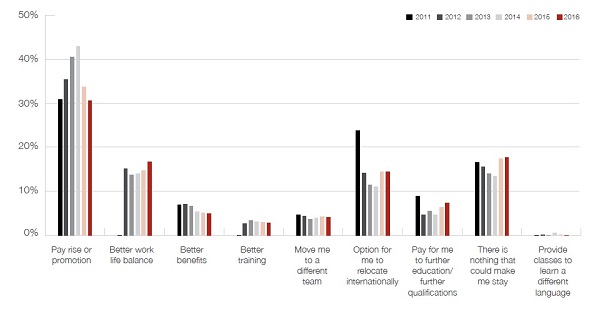 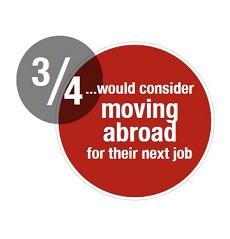 More than three quarters of all auditors and accountants would consider moving abroad for their next job. As expected, Western Europe continues to be the top choice of region to work within, although the 2016 figures show an increasing number wanting to work in North America (17%). Australia/New Zealand is now most third most popular region (14%) and the most popular destination amongst all 18-30 accountants (19%). The Middle East’s popularity is decreasing with the lowest percentage compared with the past 7 years of data recorded. It is interesting to see that the top reason that most professionals look to move abroad is the need to have a better work-life balance, although the top reason chosen by the younger generation for moving to foreign climes is to progress their career (18-30s).

Are today’s accountants feeling the fear at work and doing it anyway? Despite the conservative and risk averse perception of professionals within the industry, it seems there are some areas in which accountants are actively embracing change, letting go of fear and progressing their careers. Many more are actively looking for a job right now and an increasing number are wishing to experience working in another country. The majority do not currently see Brexit as a worry and perhaps some see this as an even greater opportunity. The majority also expressed a desire to set up their own business at some stage in their career, which demonstrates the year-on-year increase in entrepreneurship from within the industry.

That said, whilst many are acutely aware of the changing role of the accountant – a large number are feeling worried about being left behind because they don’t have the right skills or that their position will become redundant due to automation and technology.

Being aware is one thing, but taking control is another. Both bosses and employees now need to have a far more proactive approach to addressing any skill deficits for the changing requirements of the role and profession.