Survey Results: Is it Time to Move On? 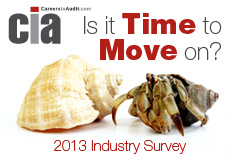 Age discrimination in the accountancy profession is rife, according to the latest survey by CareersinAudit.com.

Since 2010, CareersinAudit.com has conducted annual mid-year research to gauge how auditors and accountants across the globe view the job market. This year we continued our previous research into why audit and accountancy professionals from around the world change jobs and explored whether ageism in the profession is 'fact' or 'fable'.

Key questions we asked of our candidates were:

Over half (57%) of the 2,011 accountants surveyed between 5 August and 13 September 2013 believe that ageism is alive and kicking in the industry. Nearly half of all those surveyed (48%) stated that people in the industry find it harder to get a new job or promoted once they reach the age of 40.

Half of the respondents of this survey were over the age of 40 and more than a third of this demographic (37%) believe they have missed out on developing their career (either an external job or internal promotion) because they have crossed this age threshold. Just under half of this group (44%) admitted that they were not given a reason from the company or line manager as to why they had been unsuccessful getting the new position. Whilst 20% admitted that they missed out because someone else had a better skill set, a further 9% said they didn't get the job or receive the promotion because they did not fit the company culture.

According to the research, part of the problem is that that bosses prefer to recruit younger professionals because their salary expectations are not as high and they are prepared to put in longer hours, particularly in the tough economic climate.

Some believe companies are looking to ‘mould’ their employees to their requirements and there is a perception that ‘older’ accountants may not be willing or able to change the way that they work.

Others believe that there is a perception amongst Partners and senior management of companies that accountants who are aged 40+ are not up to date on technology advancements compared to the more ‘technology-savvy' twenty and thirty something generation, or that they do not have other necessary skills for modern day accountancy.

“Whilst the industry needs to continually embrace new and recent graduates to the fold and train them up, accountants who have many more years of valuable experience should not be put out to pasture either."

"It is shocking in the 21st century, that the majority of the profession believe age discrimination to be so prevalent. HR departments should be scrutinising their equality policies and ensuring that all applicants, regardless of age, are given a detailed breakdown of why they were unsuccessful. Transparency is crucial."

"Bosses should take a long considered look at all their training requirements. Our research also revealed that two thirds of accountants do not believe their company is doing enough to help with their career development."

"If the right training was given to all staff, of all ages, then we could see a different culture emerging and a much fairer playing field for the more experienced accountants.”

This study was conducted amongst 2,011 accountants during August/September 2013.