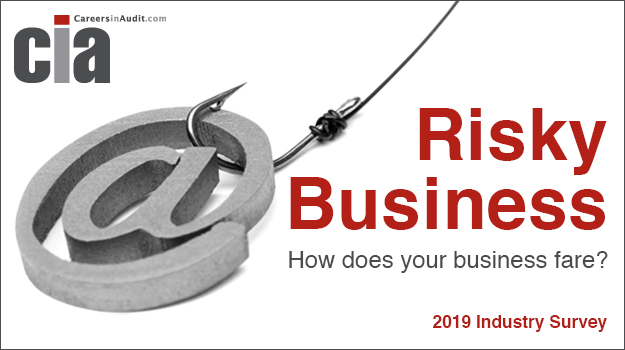 CareersinAudit.com’s annual survey 2019 took a focus on cyber and data security, delving into the top risks concerning those in Audit, Risk, Compliance and Accountancy.

The results were telling, with data breaches unanimously king concern for companies across the board. Unsurprisingly again, the shifting regulatory environment of the past few years added these changes as the second headache for businesses to combat. With these concerns only spiralling, responses link the obstacles to overcome them back to flawed organisational culture.

Questioning where company concern should focus found some other surprising results amongst the typical suspects. From shifting cyber concerns to ongoing relocation desires, below explores the survey results.

Risky business – where are the biggest risks?

Reflective of previous years, data breaches continue to be top concern for businesses according to almost half of survey respondents. “Data is the new money” according to one respondent and 45 percentage agree that with data breaches becoming increasingly common and sophisticated they definitely deserve first place. Changing regulatory environments, phishing and malware were further concerns evenly split among respondents.

When asked to expand on the biggest obstacles to managing these security risks, responses shared consistency. The “high cost of implementation” and “constant change” were themes among answers along with a “lack of awareness…leadership…initiative…[and] qualified practitioners”. With resources and knowledge stretched thin, issues of culture weave these concerns. The below two responses effectively summarize this consensus;

Almost 50 percent of respondents believe that when it comes to approaching security their company “identifies threats and takes action”. Another 34 percent believe their company proactively monitors and eliminates all threats, whilst another fifteen percent believe threats are identified but no action is taken. Surprisingly, less than five percent admit their company does nothing in their approach to security. Given the 4.1 billion security breaches recorded in the first half of 2019 these results show a surprisingly level of over-confidence.

Are employees being oversold on their company’s security practices?

Fear, uncertainty and doubt surround the dark web. Whilst limited understanding surrounds who exactly is operating on this relatively unknown platform, one common theme that links many is their lust for personal data. The Vice President of Research at cyber security firm Terbium Labs Emily Watson shares that “in the hands of criminal actors your personal data can have serious and potentially dangerous consequences.”

With this data risk, the dark web continues to pose a threat for over 45 percent of respondents.

It is evidently remaining a topic of concern within the industry. Of those who see it as a potential threat, their concern lies in issues from the potential reputational damage to financial losses. Risks include;

“Reputational first and foremost”
“Fraud, phishing and cyber terrorism,” and
“It represents a marketplace for trading stolen personal data”

Solutions to mitigate the risks posed by the dark web were divided. Almost 30 percent of respondents cited technology investment as the top solution, whereas another 30 percent thought the recruitment of dedicated risk management or technology professionals to be the best approach. Additional staff training and buy-in from the board accounted for most of the remaining responses.

When broken down further, those working in audit, either internal, external or IT, accounted for almost 60 percent of yes responses, whereas those within the cyber security field accounted for less than five percent. Could this drastic divide in concern stem from a lack of dark web knowledge for auditors?

Cyber Security – the need to outsource

One almost unanimous response of the survey was the need to diversify and outsource cyber security and data privacy support. In efforts to stay on top of threats, almost 85 percent of respondents cited this need to outsource. Of these respondents, 70 percent believe the industry needs to educate and support with enhanced training and guidelines to drive this change. Whilst the majority of other responses called for government intervention to introduce more stringent regulations, laws and fines.

Shifting focus from risky business, our 2019 survey again looked to the audit job market, questioning all things relocation, recruitment and beyond. A survey feature since 2008, these answers are telling of the wider audit industry which continues to experience change.

To Stay or Go? 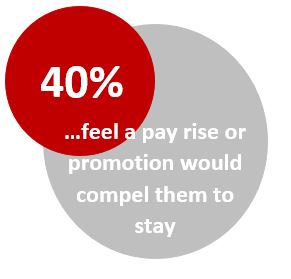 Unsurprisingly money still talks. Almost 40 percent admit a pay rise or promotion would be the most compelling incentive their current employer could offer to convince them to stay. Almost 15 percent however believed there is nothing that could convince them to stay, even money. The option for international relocation (13.5%), better-work life balance (10.1%) and better benefits (7.4%) were the three following responses that would convince employees to stay.

Looking beyond security and risk, the survey found the desire to work abroad as the main driver for those searching for a new role, an ongoing trend that CareersinAudit.com’s annual survey has found since 2015. Almost three-quarters would consider moving abroad for their next role with North America, Australia, New Zealand and the Middle East the most desirable locations selected for their work-life balance, career progression opportunities and improved salary.

Beyond relocation, almost 25 percent view their lack of promotion or pay rise as the main driver for them to leave their current job within the next two years. Following this was a dislike for their company culture (11.9%), the desire to start their own business (11%) or the drive to move to a new industry sector or work in-house (7.5%). From the other perspective, of those planning on remaining with their current employer for the next two years, motivation was evenly divided. Twenty-eight percent cited the need to build experience, a further 23 percent are happy in their current role, 16 percent feel there is no better role available and 13 percent feel their age is barrier and feel it is best to stay put. 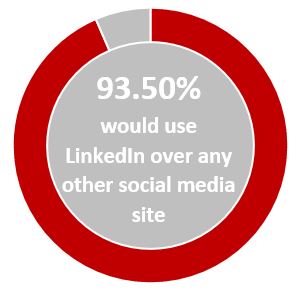 Beyond social media, recruitment agencies were the second most popular avenue for those looking for a new job, closely followed by job boards. The use of an individual's professional network and searching through professional bodies such as the ACCA were not as popular as other pathways but still would be an avenue considered by a significant number of respondents.

The ongoing issue of gender imbalance

Of survey respondents, females interestingly accounted for less than a quarter of the total responses. A reflection of the wider auditing industry, this unequal balance is telling of the industry's slow progress in 2019. Clearly an issue that spans beyond senior and managerial levels, with survey respondents in roles from graduate to CEO, the results highlight the slow progress of the auditing and wider accounting industry.