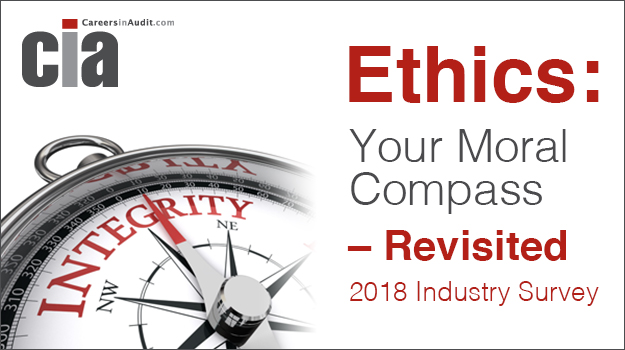 Since 2008, CareersinAudit.com has commissioned a yearly piece of bespoke research looking at different aspects of the Audit, Governance, Accountancy and Technology world. This year we revisited our previous research into your views on moral and ethical dilemmas in the workplace and intimate relationships at work.

The results were telling, with more than a third of all accountancy professionals confiding that they are aware of a senior staff member at their current workplace who has made a decision to deliberately choose a commercial result for the company, even though the decision could be regarded unethical. The results also showed half of all accountants and auditors surveyed have been pressurised, or know someone who has been pressurised, by manager or a partner to ignore an adjustment that should have been made to a set of accounts. Nearly a quarter of accountants (22%) believe that more than 25% of the profession have helped their clients create a set of deliberately misleading accounts. With a further 16% believing 10-20% of the profession are involved in shady activity and a further 24% believing the percentage involved is between 5-10% of the profession.

Towing the ethical line raises many workplace concerns, from fears of dismissal or reputational damage to losing a client for speaking up. Here are our confronting survey findings that shed light on questionable workplace culture and unethical codes of conduct currently impacting the industry.

Is the boss always right?

If respondents encounter situations where they suspected that their boss was participating in unethical actions, more than one third of employees (37%) made their boss aware of their concerns whilst equally, another 37% informed HR or their industry body whilst remaining in their job. Notably, only 5% resigned, not wanting to be associated with a firm that undertakes unethical practices. 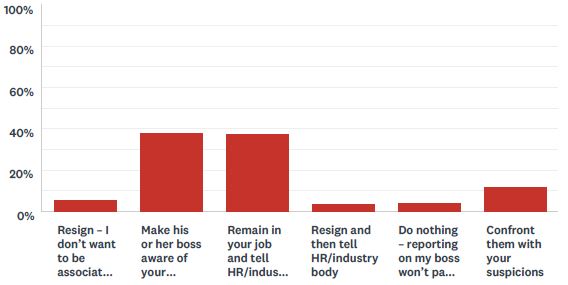 Almost all of the respondents actively addressed their concerns, with only 4% remaining silent believing the possible reputational repercussions too substantial. Whether it is a fear of nothing changing or long-term reputational tarnish, employee hesitation to ‘speak up’ remains.

Undoubtedly, the global debate around workplace ethics in the recent years has encouraged some companies to review and improve their policies. More companies working to change the notion that unethical behaviour is simply “what happens here” is somewhat reflected in the respondent’s confidence to address workplace misconduct, however results below show that company efforts are not far-reaching.

Whistleblower Victimisation or Dismissal – When in doubt, keep your mouth shut? 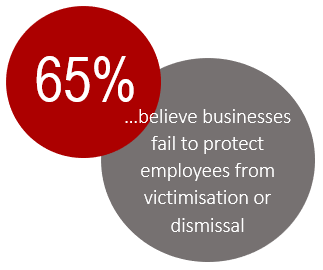 When asked if businesses' do enough to protect whistelblowers, the results highlighted that over half of accountants (65%) believe businesses fail to protect employees from victimisation or dismissal after reporting the misconduct of a colleague. This negative perception continues with clients, with again 57% of respondents believing employees are not protected if they report the wrongdoing of a client.

Respondent’s apprehension to address workplace misconduct reflect the need to create enforceable codes of practice which ultimately encourages the right working culture of reporting fairly and without fear. It sounds basic: if something is wrong at work, employees should speak up about it, however 'falling into line' seems to be the safest way to avoid being fired, marginalised or simply made to feel irrelevant. 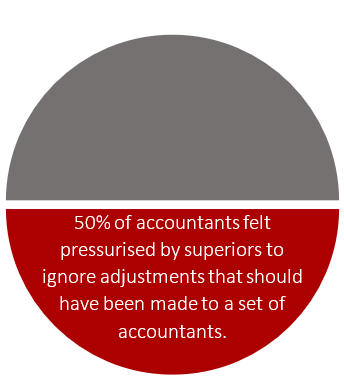 Half of accountants, either personally or knowing of its happening, felt pressurised by superiors to ignore adjustments that should have been made to a set of accountants. The fear of victimisation or dismissal again make employees feel afraid to speak up or challenge traditional, unethical methods.

Over a third of accountants are aware of a senior staff member at their organisation making a decision that deliberately chose a commercial result for the company, even though the decision could be unethical. Bribes, falsified numbers and misleading reports were all repetitively listed in responses.

“It happened in every job… what should we, can we do… we are just employees”

In an industry wracked with scandals, internal and external punishment is commonly viewed as being laid on thin, with warnings, suspensions and fines the common penalty. The survey results show those within the industry think punishment needs tightening. Over half of accountants believe an individual who signs off on a deliberately misleading statement should be banned from practicing their profession, whilst another 9% believe punishment should go as far as prison. Dismissal from their job was selected by 18% of accountants and receiving a ‘hefty fine’ was also strongly selected by another 8%.

Of the additional responses, being “fired and criminally charged” was repetitively noted, many also citing fines and banning for practicing for an indefinite period in the future. Many noted the severity of the situation should be a considering factor – “it depends upon the circumstances, and the impact” and “depends on the scale of the offence”.

Overall, the results show a need for more adequate and substantial punishment.

In your experience, which of the following professions do you think are the most trustworthy?

Of respondents, almost half (48%) believe accountants to be the most trustworthy profession, with management consultants (21%) and lawyers (18%) ranking second and third.

Corporate bankers, investment bankers and corporate financiers are ranked worst. Historically, professions in public finance and private banking have received a lot of scrutiny and this generalised belief is reflected in the results. 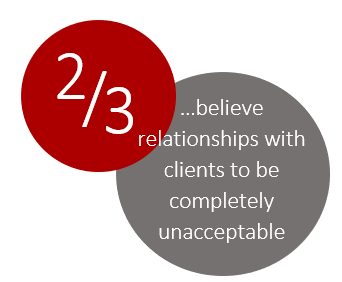 Engaging in a relationship with a client? Two thirds (64%) of accountants believe this to be completely unacceptable, whereas 30% believe it is suitable if it is not with someone directly in the client team. The remaining believe a client relationship is acceptable only if with a private client.

What action would / have you taken if you knew an inter-office relationship was taking place?

In line with these previous responses, almost half of respondents would say nothing if they became aware of an inter-office relationship. Whereas 24% would report it to their line manager whilst another 16% would take it to the top to avoid it impacting the work environment and team productivity.

Offices however do not actively discourage such inter-office relationships from occurring. Over 90% of respondents state their company does not have a ban on office relationships, however of this 90%, 20% state whilst there officially is no ban, it has been implied that they are not allowed or at least strongly discouraged.

Despite continual regulation and attempts to repair such a scandalised industry, it is clear unethical practices continue to plague companies. From fears to speak out against unethical practices to inappropriate workplace relationships, there is a strong call for action for companies to implement stronger ethical benchmarks.

Creating deep cultural change is required to empower employees to speak up. Reward ethical conduct, not punishing it, needs to be paramount.