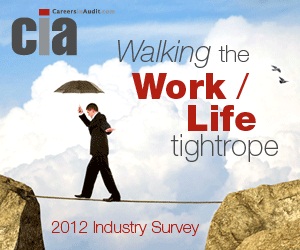 One in two Audit & Risk professionals have admitted that an increase in working hours has had a detrimental effect on their health with stress, low energy, and insomnia all ranking high according to the latest survey conducted by CareersinAudit.com. Yet 40% believe their company has offered no support during their period of ill-health, with a further 24% too scared to tell their company, as they thought it would have a negative impact on their career progression. Just 3% of companies provided a coach or counsellor.

Nearly three quarters of all auditors are working in excess of a 40 hour week, with a fifth working between 50-70 hours a week. Nearly half (47%) have seen hours increase over the last year with nearly a quarter (23%) at least of 2-5 hours more a week and 15% working at least 5-10 hours extra a week.

Even when they are on holiday more than a third of auditors (37%) are checking their phone or computer for work purposes at least once a day, with a further 21% checking between 2-4 days. Just under a third (32%) had been prevented from attending important occasions because of work including birthday parties, family holidays, funerals, weddings and important school events for their child.

If given the option of freeing up 10 hours a week of their working life, nearly half (48%) would spend it with family, friends or partner. Yet whilst there may be a desire to have a better work life balance, nearly three quarters of audit professionals (72.5%) accept that giving greater priority to personal interests and or family would hinder their career progression.

Nearly six in ten audit & risk professionals (56%) admitted that their company could be doing more to help with their career development and provide more coaching, support and training - 31% believe that career development is fairly low on the list of company priorities.

Despite working many more hours, many auditors do not feel they are being rewarded. 42% are now currently looking for a new job and 69% will be looking within 6-12 months. Although nearly half (46%) could be persuaded to stay if they got a pay rise or promotion

“It’s disappointing that so many audit & risk professionals feel they are not being given the proper support with an increased workload, or feel their career progression would be jeopardised if they spoke to a line manager about this. There is almost an acceptance amongst the industry that work related illnesses are par for the course – that it’s better to be silent so as not to rock the boat and potentially jeopardise a pay rise or promotion.

With many now actively looking for work and the figure set to rise dramatically over the next six months/year, bosses cannot afford to be complacent. They need to start rewarding top performers and those putting in the hard work. Many audit & risk professionals would welcome the creation of a more structured and accessible career development programme in their firm, as well as coaching and counselling, particularly when they are under so much pressure. If bosses fail to take action, we could see a nation of burnt out auditors and a rising number exiting the industry.”

Other highlights of the research:


The study was conducted amongst 1,231 accountants during May/June 2012.