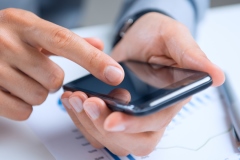 These days I carry out a sizeable amount of my work remotely; meetings, client sessions, learning and development, they are all as likely to be facilitated by a device or a receiver than around a tangible table.  And I'm speculating that if this is not the pattern of your own current workload, then it will, in time, become an emerging trend for you too.  After all in this land of the cloud, awash with proliferating digitalisation, how could you avoid being swept along by the all-consuming techno-tsunami?

I have no problem with this.  In fact I would go as far as to say that I love this aspect of the world that I live and work in.  As someone who started their working life in the 80s when techno-smart was the nokia brick (and how cool did that feel?), now thriving alongside my two true techno-savvy millennial offspring, I'm loving the freedom, autonomy, flexibility, knowledge and power of the twenty first century techno-age.

So what's not to like? The thorn in my side is not the devices themselves but the lack of etiquette around device-related behaviour.  My worst bug-bear? -  the insidious tap tap tap of the keyboard as a steady accompaniment to a remote meeting.  That's the worst, but there are many more examples, like the team meeting fissured by the participants seemingly engaged with their screens in preference to their team mates.

Am I being over-sensitive, prickly, or just plain pernickety here?  There is, of course, a benefit to these behaviours: the remote team member able to instantly wing over the piece of work causing the team consternation or the vigilant note-taker, whose record of the discussions will add indispensable value to our own humble scribbles.

So it's not the principle I object to - as a productivity guru I'm a veritable fiend for the efficiencies that tech can bring.  It's more about the lack of a behavioural ethos around our mega multi-communication platforms.  I mean, it's simply rude to avoid the social etiquettes of human communication without proffering any explanation.  You wouldn't just answer your mobile in the middle of a meeting and proceed with a 15 minute conversation amid the assembled company (would you?).  You abide by some simple etiquette; you might warn the team in advance that you were expecting a critical call, you would take it outside the room and you would certainly apologise and/or ask permission.

All simple stuff, but enough to relegate the interruption to mildly irritating, no more annoying than any other bog standard office-distraction.

So why can't we expect a similar level of courtesy around other breeds of device-creep? Permission seeking by the device note-taker at a roundtable?  Upfront contracting at the start of a conference call to outlaw keyboarding? Apologies at the outset where a contributor might have to leave early?  (We've all been there: What's happened to Adam?  Has he been disconnected?  Disenfranchised?  Or simply skipped off early!)

Multi-tasking ain't going to go away any time soon (despite all the studies that warn us of the hazards of continuous partial attention).  But if we are gonna to do it then I call for a simple protocol of communication, courtesy and common sense.  Let's get some ground rules in place, let's respect one another and let's lay down the principles for better communication for our fabulous mega multi-media platforms.  Let's build our own new techno world and make it a great place to live!