The Auditor’s Guide to Conflict Resolution 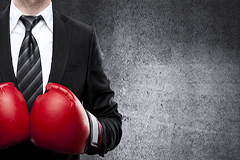 Disputes and Deadlocks: the auditor’s guide to conflict resolution

If you’ve managed to navigate purely tranquil waters in your career, then bon voyage! But if, like the rest of us, you steer through the turbulent rivers of difficult people, delicate relationships or out-and-out conflict, read on.

Conflict comes in all shapes and sizes and many different guises
And here are just a few:

1. Type of conflict: Disagreement on policy and procedure: what and how, and by whom

2. Type of conflict: Interdependence: one job affecting  another

3. Type of conflict: Differences in style and approach

Practical examples:  The ‘task orientated’ just wants to get the job done quickly, while for the ‘process orientated’  having it done in a particular way is paramount
• A preference to work alone as opposed to as a collaborative team
• One leader is open and inclusive whilst another is directive and autocratic

With so much scope for conflict, it’s a miracle we ever do anything in harmony!  But conflict is an inevitable part of business, and life.   If you haven’t encountered it already, you soon will!  And the good news is conflict is not always bad.  Effectively resolved, conflict can bring personal and professional growth plus an opportunity for constructive change.

As a middle manager, Michael was doing well.  He had a strong, productive relationship with his line manager. They worked together so effectively that they consistently over –achieved, so much so, the line manager was promoted and moved to another department.

Michael had no foreboding about the change. He had a strong grip on his personal objectives and the objectives of the business, and he relished the challenge of inducting a new boss into the department.

The reality was rather different.  Within days he knew something was going wrong.  It appeared that he and the new boss had a personality clash. Nothing he did was right, mutual communication broke down and each felt the other wasn’t up to the job.  Within weeks, the department’s performance slipped, deadlines were missed, results were off and the two were bristling with resentment.

As his coach, I was called upon to unpack the situation.  What quickly came to the fore was the magnitude of Michael’s relationship with his former boss.   The two were different personalities but they’d built a powerful modus operandi, based on an alliance of equals, bringing different strengths to the relationship.

The result was a powerful synergy where the whole truly was bigger than the sum of the parts. Without his old boss, Michael had become just one of the parts. The synergy had evaporated.

Two sides to every story

Michael did acknowledge that the new boss wasn’t just a collection of faults.  We did a quick analysis to identify his strengths as a leader and the value that he brought to the role. This produced a considerable list; Michael couldn’t help but be impressed.  So what was going wrong?

Michael decided that it wasn’t what the boss actually did – it was the way that he did it.  In other words, the source of their problems wasn’t the first or the second type of conflict in the box above;   but it did embrace, to differing degrees, the other three.  This realisation was helpful as Michael could now establish a way forward.  But first we had to look at what Michael himself was doing.  Because of course, we can’t change other people but we can change our own behaviour. When we do this, we get a different response.

What’s your preferred way of behaving in a conflict situation?

We started with a questionnaire.  Like Michael, you can take the Thomas-Kilmann¹ Conflict Profile¹ by emailing me.  Michael’s profile showed that he had shifted from a healthy, effective collaborative style to plain avoidance.   Michael had unwittingly slipped into this – flagged up by procrastination, lack of assertiveness and co-operation – because he felt disempowered and frustrated.

And the new boss?  His management style was hands on, directive, command-and-control; an approach totally alien to Michael.  With his old boss, their ‘relationship of equals’ was founded on adult to adult² communication.

This proved an effective work style, characterised by responding to hard facts in the here and now, employing logic and reason, over feelings and emotion.

But Michael saw his new boss as a ‘controlling parent’², and this took Michael back to the past, unconsciously re-playing relationships with parents and teachers, falling back on ingrained patterns.  He adopted modes of operating that had made sense as child (digging in his heels, stubbornness, rebellion) but which were no longer appropriate in adulthood.

This was a major breakthrough.  But before we conclude Michael’s story, let’s take a look at some of the other ways to break the conflict cycle.

Conflict can be destructive. Legitimate differences spiral out of control and lead to situations where co-operation crumbles and business objectives are jeopardised.  To calm these situations, take a positive approach to conflict resolution and follow these golden rules.

2. Communicate.  Get issues into the open quickly.  Avoid festering and escalation.

3. Deal with issues rather than personalities.  There is no such thing as a ‘difficult’ person.  We all have real and valid arguments. By separating the problem from the person, issues can be tackled while the relationship is safeguarded.

5. Agree the issue. Disparate needs, values and goals mean we perceive issues differently.  Different people see different problems.  Even if you can't establish a common perception of the problem, you need to understand what the other person sees as the problem.

6. Agree the objective.  Where do you both want to be?  What will progress look like?

7. Describe the conflict in objective terms: how does it affect performance/client service/the team?

8. Explore options together: brainstorm, remain open to all ideas.

Michael’s journey is ongoing.  Without a doubt he’s on a much bumpier path with his new boss than with his old - because their innate styles don’t gel naturally. But the two do now have a modus operandi shaped by the tips above.

And overall, Michael feels better equipped to work constructively with a wider variety of people: co-workers, clients, intermediaries.  He’s become more self-aware and developed the ability to adapt his own style to circumstances.

And all in all, he is now a more savvy communicator.

Notes
¹ In the 1970s Kenneth Thomas and Ralph Kilmann described five styles of dealing with conflict. They noted that individuals have a preferred conflict resolution approach and they identified which styles were most appropriate in a variety of situations.
² ’Adult to adult’ and ‘controlling parent’ are terms used in Transactional Analysis.  Developed in the 1960s by Eric Berne, his seminal work was ‘Games people play’.

This article was written by Carol McLachlan for CareersinAudit.com, the leading job site for auditing vacancies.