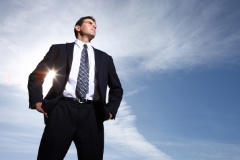 Resilience: What does it mean and why does it matter?

Resilience is in the news.  Whether we're talking Andy Murray and his bid for the Wimbledon title, doggedly holding on in there since he made his first semi-final appearance in 2009.  Or rugby, where we watched the Lions, 'snatching defeat from the jaws of victory' as one commentator put it, to then roar home to win against Australia in their first series triumph for sixteen years.  And it's not just sport.  In the business arena, we see corporate resilience, just look along your high street to see the last consumer names still standing.  We are inspired by resilient cities that fight back after devastation.  Not to mention, the resilience demonstrated by individuals; who can fail to be awed by the tale of J K Rowling's epic twelve submissions to publishers, before Harry Potter came to be.

But resilience and the auditor?  What's that all about then?  Well, how about having the confidence to apply for a role that's going to stretch you?  Or not letting fear of failure stop you going for that promotion?  Or simply taking criticism on the chin?  The resilient auditor weathers all of these and the rewards speak for themselves - wider career choice, less stress, more optimism and indeed, a much greater chance of finding personal fulfilment.

Welcome to the first of a ten part resilience building programme, tailored specifically to the trials, tribulations and triumphs of being an auditor.  We are going to take you on a developmental journey. You'll learn the tools and techniques to weather career, and life storms, and emerge stronger, more confident, with a clearer focus as to where you want to be and how you are going to get there.  The key is, of course, resilience...

More, much more than just bouncing back

Bouncing back is certainly a stirring start.  Look at any dictionary definition of resilience and you'll get a sense of endurance, persistence and recovery, a veritable bouncing back in the face of adversity.  It's resilience that enables us to deal with difficult situations, recover from failure and persist in the face of setback.

But resilience is more than mere coping.  Resilience is the magic ingredient that enables us, not only to survive, but to thrive; to grow and develop as a result of what we've undergone.  It's not just about returning to form, but returning, fortified, stronger and wiser for the experience.

If there's one certainty in life, its change.  Organisational change, career change, birth, marriage and death, all change, for good or for ill, requires resilience.  And in these turbulent times of globalisation, virtualisation and individualism, change is ubiquitous and omnipresent.  Working through change requires resilience; capitalising on change demands resilience.  The very same resilience that will drive us to transform challenge into opportunity and learn from failure.

'That which does not kill us makes us stronger' - Friedrich Nietzsche

When we experience adversity or stress in any aspect of life - and we will - it can promote a powerful emotional response such as anger, grief or fear.  Developing resilience keeps us functioning in the face of life’s inevitable setbacks – both physically and psychologically.

But resilience doesn’t mean toughing it out or going it alone, in fact, as we shall see, being able to reach out to others for support is vital in building resilience.  Resilience is about developing the self awareness and humility to change direction, to admit mistakes and to adjust and adapt.

Personal resilience is also associated with lower levels of depression and will help you develop good old fashioned  ‘character’ and a mind-set which will get you through when the going gets tough.  A core competency for stress management, it will protect and sustain you and keep you from going over that tipping point from pressure to stress.

Despite the obvious benefits, aforementioned, there's another very good reason why resilience building is so topical: there's a strong evidence base to support its efficacy.  Over the last decade, the study of resilience has expanded significantly and encompasses practical applications as well as theoretical studies.

Organisations from Google and the US military to a number of the big accountancy firms are investing in the personal resilience development of their staff because they know it pays off.  With abundant research suggesting a host of work place benefits from reducing absenteeism and increasing engagement to enhancing confidence in dealing with difficult relationships and complex problems, a resilient workforce has been proved to pay dividends.

What is more, resilience is teachable and learnable. Once we reach adulthood, our personalities remain relatively stable. However, our levels of resilience can vary considerably. Fortunately, everyone has the ability to build and maintain their levels of resilience. Neuroscience can now describe how new neural pathways can be developed and this neuroplasticity of the brain means that we have the capacity to build a type of mental muscle, which, just like its' physical counterpart, can protect us in the face of adversity.

Now it's your turn

There are always going to be those, seemingly, naturally resilient people; the ones who just bounce back from whatever life throws at them. Most of us though, have a resilient core, that is, a selection of innate skills and preferences that get us through when the going gets tough but sometimes at a personal cost. Resilience is actually a process which is built up over time, as we design and develop coping strategies and enhance our mental strength.  So a consciously accumulated repertoire of tried and tested strategies can result in a personal portfolio of skills, tools and techniques, which boost options and increase the odds of adapting and flourishing.  And that's what we are going to bring you in this new series, shaped and customised to the fit the particular challenge of a career in audit.

There is no such thing as failure...

How trite, I hear you say!  But in closing, let me share my favourite resilience-building anecdote. This about a school who held a 'failure week', coaching pupils to take a risk, build adaptability and learn from their mistakes. With the emphasis on the benefits  of 'having a go', as opposed to playing it safe, participants experienced, in a very practical setting, the art and science of resilience - endurance, recovery and learning in the face of adversity, and dare, we say it, FAILURE.  Now that's a change in mind-set...

Carol McLachlan, theaccountantscoach, is a qualified accountant, NLP Practitioner and professionally qualified coach. Her 18 year career at Ernst and Young in Audit and Assurance as a client handler and as Director of Resources has equipped her with a real understanding of the professional and personal issues that auditors face.

As theaccountantscoach she works in partnership with individuals and organisations - quite simply - helping them to be the very best they can be.  She has helped accountants and auditors move from employment to entrepreneurial pursuits, prepare for their next promotion, become inspiring leaders and engaging presenters and manage their work life balance. Carol writes and lectures extensively on a wide range of professional development topics and is currently researching 'CPD in accountancy' for her master's degree.