Why your Employer Should Love you More... 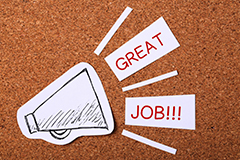 As an enormously valuable finance professional, does your employer treat you with the love and care that you deserve? The sad answer is quite likely to be… no. But the good news is they might soon have to change.

We’ve all heard the rhetoric about people being an organisation’s most important assets, but so often it’s just empty words. That’s as true for finance professionals as it is for everyone else, even though there is an acute shortage of skilled people in this area, which is only likely to get worse.

A survey from business advisors Deloitte shows that efforts to attract, keep and develop finance professionals was not a chief priority for most companies. Actually, two thirds of CFOs said they didn’t even have a recruitment strategy for finance staff.

Ironically, over a third of the CFOs in this global study also complained that their department was barely able to meet its current demand for skilled professionals, never mind the extra people they are likely to need in future.

And whose fault is that? The problem is that many CFOs have taken their eye off the “talent ball,” explains Marcus Boyle, head of Deloitte’s finance consulting practice. Regulatory change had increased their workload, meaning that staff retention and development had slipped down the to-do list. The impact of that failure is now playing out, says Boyle. “Demand for high performers in finance is outstripping supply and few companies are doing what it takes to lure top talent.”

Actually, the problem seems less about luring good people in than it is about hanging on to the good ones you’ve got already. The number one reason why finance people leave their jobs was a lack of career development – 48% said it’s what made them walk.

Boyle says CFOs should take personal responsibility for developing their staff at all levels. “Some CFOs take an active interest, others simply delegate it. You can guess which has the better talent in finance. Real people programmes must be created to take finance people all the way through their career.”

There’s another way in which many CFOs are shooting themselves in the foot – they were failing to help their staff gain the wider business skills they will need to develop their careers. Ambitious finance professionals need solid technical finance skills and strong business knowledge, which they often gain from working in other business departments. Yet 38% of the CFOs in the Deloitte survey said they were reluctant to release individuals to other company departments. They should be grooming the next generation of finance leaders, not hording talented people. It’s another reason why people leave.

Are companies likely to value their finance staff more in future? “Economic factors such as the ageing workforce means talent management was once a ‘good to do,’ today it’s a ‘vital need’ and driving competitive advantage through people is key,” says Boyle. Companies need to re-brand the finance function as a career with great potential for growth and advancement, he adds.

That might just be another bucket-load of rhetoric, but the numbers seem to speak for themselves. Deloitte surveyed companies from around the world, and found that the shortage of good finance staff is truly global. In every region at least half the CFOs said the current supply of finance talent was either limited or inadequate. The only exception was North America, where the percentage was 47% – which is bad enough.

It’s all part of the wider change in the role of the finance function. A shift away from traditional accounting and reporting towards strategy and leadership is intensifying the need for talented people and adding to the growing range of issues CFOs must address.

In the UK, indeed, companies are facing a “financial professional skills crisis,” according to the Association of Chartered Certified Accountants (ACCA). "An increase in world trade and regulation has created high demand for professionally qualified accountants. But the supply has not met this demand, leading to a shortage of finance professionals required to support the growth of the world's major economies," says Clare Minchington, ACCA’s managing director for education, learning and development.

Minchington says this crisis is likely to continue for some time: “It will be exacerbated by the impact of an ageing demographic across most developed economies, leading to further skills shortages.”

ACCA issued its crisis warning to accompany the publication of what it calls a “learning and skills manifesto” – aptly, it was launched at the Labour Party’s annual conference. This calls for the government to make sure that the accountancy profession is involved in its plans to review the school curriculum and its reform of post-school qualifications, “so that qualifications meet the real needs of employers.”

The natural response of a qualified finance professional to all this might simply be: “crisis, what crisis?” The ACCA press release that announced its manifesto noted that the shortage of skilled accountants is pushing up salaries, with the average accountant now earning more than £100,000. “What’s the problem with that?” you could be forgiven for thinking. Facing the prospect of ever increasing salaries and a sellers market for their skills, why should qualified finance staff be worried?

Well, the ACCA warns that businesses might be forced to employ the services of unskilled finance staff, in which case “the quality and integrity of financial information relied upon by investors may be jeopardised.” It remains to be seen whether that will really happen, or if it’s just scaremongering.

In the meantime, rather than blaming schools or the government, companies concerned by the shortage of finance staff should maybe look closer to home. Are they doing enough to attract, develop and retain the people they need? Clearly, many companies do. But according to Deloitte, a surprising number don’t. CFOs at these laggard companies need to buck their ideas up and value the professionals they employ. The finance role is so important now to the wider organisation that if a shortage of staff turns into a crisis, and it stops finance performing to the level required, it’s their necks that will be on the block.

Written by Neil Baker, a professional auditor, for CareersinAudit.com