Words not to Use in your Professional Audit CV 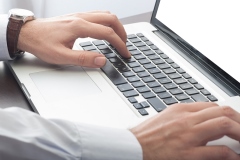 “It’s only words.” Song title by the BeeGees.

“Words used carelessly, as if they did not matter in any serious way, often allowed otherwise well-guarded truths to seep through.” Douglas Adams ‘The long dark tea-time of the soul’

The first impression that your future potential Audit manager will have about you will come from reading your CV or resume. So you need to make it the best you possibly can – by ensuring that it contains the best words you can find to guarantee that your qualifications, experience and personal qualities are all expressed as clearly, concisely and accurately as possible, and by avoiding the use of meaningless words, and outdated or clichéd expressions.

Each year the world’s largest professional network, LinkedIn, publishes an annual list of overused ‘buzzwords’ gleaned from over 200 countries around the world. These have recently included, for example, the word ‘analytical’ in Switzerland, ‘effective’ in India, ‘experimental' in Brazil, ‘multinational’ in Indonesia, ‘responsible’ in Italy and ‘specialised’ in Spain. In 2014 their top ten global list of the most over-rated words that should be avoided in anyone’s CV was, in order, as follows: - Expert, Motivated, Passionate, Creative, Driven, Extensive experience, Responsible, Strategic, Track record and Organisational. In the United States, the word ‘Problem-solving’ also came high, while top of the list in Australia was the word ‘Creative’.

Other resume analysts cite such phrases that start a CV or a covering letter as ‘I am hardworking, honest, and dependable’ - pointing out that, while such openers are not necessarily bad, employers would assume attributes like these to be ‘a given’, especially as the alternative – ‘lazy, unscrupulous and unreliable’ would be hopefully untrue and ridiculous.

It is not that descriptive words such as ‘motivated’, ‘creative ‘or ‘responsible’ should not be used at all, but rather that they are used carefully in an appropriate way. They should be used to provide fitting and powerful examples of how you are motivated and how you have used your creativity to help drive business results, or how the responsibilities you have had, have impacted on both your personal achievements and the operational outcomes of your current employers. It is proof of performance that audit managers are looking for, and therefore specific examples and numbers that you need to provide.

The choice of words is therefore very important when writing your audit CV. With so many audit resumes to read and with often so little time available, audit managers and internal audit recruiters have to react not only to what has been written, but also to the precise words that have been used, to ensure they pick the right people to join their audit teams. And it is no good simply regurgitating what you have used before, copying other people’s words, or merely swapping a few words using a handy thesaurus. You need to use words that will convince your future employer that you are someone worth meeting and interviewing. I well remember reading the CV of a person hoping for a senior position, who had described herself as ‘a good communicator’, and yet was very unhappy to be told during a subsequent telephone conversation that she had not been offered an interview, because the same CV had also contained a number of avoidable spelling errors!

The business magazine ‘Fortune’ recently quoted Steve Pogorzelski, the CEO of the data analytics company ‘Avention’, as saying that he looks for just two key words in a CV or at an interview; both words are pronouns and will, he says, reveal almost everything a manager needs to know about a potential candidate. The two words are ‘I’ and ‘we’ which he expects to see (or hear) in relation to an applicant describing their successes, and their failures. Surprisingly though, he expects the word ‘we’ to be used when describing success and the word ‘I’ when describing failure. According to Steve, when ‘we’ is used in relation to success it points towards that person being a team-player and a potential senior manager, and when the word ‘I’ is used in relation to failure, it shows someone who will be accountable for their own mistakes, won’t try to shift the blame on to others, and can describe what they have learnt as a result.

Good luck with your CV writing and as always, we wish you the very best with your careers in audit.